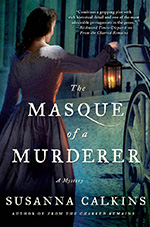 These books have slowly been picking up steam and are a wonderful reading counterpart to Sam Thomas’ midwife series. Set in mid 1600’s London – where author Calkins can dig into such juicy topics as the plague and the Great Fire (see In the Charred Remains), this novel finds former chambermaid Lucy Campion working as a bookseller and printer’s apprentice, something she’s been able to do because of the massive loss of lives during the previously mentioned events. While not common for a woman at the time, it wasn’t unknown, and Calkins runs with it. read more 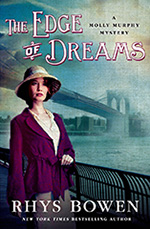 The series writer who manages to write many books with the same characters and settings, keeping things vivid, fresh, and interesting, is performing a difficult feat. Rhys Bowen does this with not just one, but two, series, and she continues to be solidly entertaining in every way while still maintaining the integrity of her series and her writer-ly vision. Her Molly Murphy series, now fifteen books in, still is a delight in every way.

Even though Molly is now a married wife and a mother, Bowen has managed not to dilute the pleasant tension between characters that keeps a series interesting. She and Daniel are married, yes, but Daniel and his mother are none too fond of Molly’s friends Sid and Gus; and Daniel is not amenable to Molly continuing to work as a private detective. Molly finds ways to investigate anyway—she can’t help herself—but it seems like the way it would happen, as Molly manages to (more or less) appease both her husband and her mother-in-law. read more 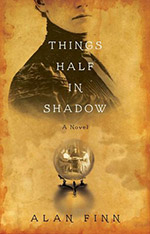 Really, this book is a lot of bank for your buck. Clocking in at over 400 pages, this book is chock full of rich narrative, coincidence, vivid setting, intriguing characters, and ghosts. I devoured it. Set in post-Civil War Philadelphia, the central character, Edward Clark, is a newspaper reporter and Civil War veteran who is assigned the task of de-bunking the city’s many mediums.

During any post-war period, mediums always pop up, as bereaved family members hope to reconnect with the dead. The first séance Edward attends is presided over by one Lucy Collins, and unfortunately for Lucy, Edward grew up in a family of magicians. He’s on to her tricks and spots almost all of them. read more 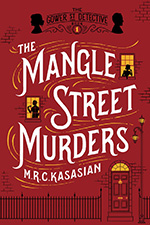 This is an old fashioned novel in the nicest sense of the word. It’s a Sherlock Holmes style tale set in 1882 London, featuring the nasty, rude, very smart and insensitive Sidney Grice. As the book opens, young March Middleton has moved into his home. She’s his goddaughter and she’s been orphaned. She arrives just as Grice welcomes into his parlor one Grace Dillinger, whose daughter has been brutally murdered and whose son in law is in prison, accused of the crime. Mrs. Dillinger is sure he is innocent. read more

The final novel in Maureen Jennings’ fine Tom Tyler trilogy is every bit as gripping as the first two – in each, Jennings explores different aspects of life on the home front during WWII. In the first, she looked at the Land Girls; in the second, at a munitions factory; in this novel, perhaps the most heartbreaking at all, she takes us to a wounded veterans home, where the men and women have mostly been seriously disfigured, blinded, crippled, or all three by their war experiences.

Jennings’ skill as a traditional mystery writer is at the forefront here. She is brilliant at constructing a story with various clues and red herrings, almost daring the reader to figure it out (I sure didn’t). This book reminded me most strongly of one of my favorite books, Christianna Brand’s Green for Danger, which is also a kick ass detective story set inside the confines of a wartime hospital. read more 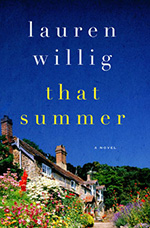 Willig is following up last year’s strong stand-alone, The Ashford Affair, with another great entry.  Using a similar story structure – one section in the past and one in the present – she skillfully ties the two threads together as the story progresses.  I liked both parts equally, which is not always the case, and was happy to re-join either character.

While neither this novel or The Ashford Affair can strictly be called a mystery, both novels center on a mysterious and unresolved disappearance that may or may not also be a death.  So there’s a mysterious nugget in each story, though, much like a Jane Austen novel, it’s the relationships and how they may or may not work out that supply the true intrigue. read more

There’s just one word for this book: delicious.  The thirteenth installment in Rhys Bowen’s fine Molly Murphy series finds Molly at home with her new baby, Liam, when all hell – literally – breaks loose.  Molly is missing her friends from across the way, Sid and Gus, who are away in Paris; and she’s missing her husband, Daniel, who is away at work almost all the time. 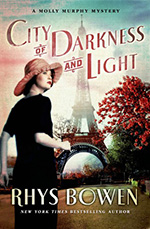 When Daniel stops by for a quick bite to eat, the sound of breaking glass is the last thing Molly knows before she realizes her house has blown up and is on fire.  Baby Liam is still inside as is Molly’s maid – the baby makes it out fine.  Daniel realizes he’s the target of the Cosa Nostra, and he thinks it’s a good idea to send Molly and baby Liam off to Paris to stay with Sid and Gus while he works things out at home.  They’ve already begged her to visit. read more

It’s been awhile since I’ve checked in with Charles Todd’s Ian Rutledge – he hasn’t changed much, though Hamish, the voice inside his head, has retreated a bit.  He’s still a thorough and careful detective.  Todd is great at set-ups, and this book has a really good one:  a man is shot and killed by a sniper on the way into a wedding.  In 1920. There’s apparently no rhyme or reason to it though the book opens with a prologue at a funeral where someone is full of flat out hatred for the dead man.  The mother and son behind Charles Todd are far too clever to give away who that might be, however. read more

No offense to Mr. Thomas, but it’s sometimes hard to believe that he is a male writer, so completely does he embrace his female protagonist and get inside her skin, while at the same time illustrating through action the variety of obstacles that faced a woman in 1640’s York.  It helps that his Bridget is a midwife, the most female of professions.  It’s not questioned when Bridget goes to all parts of the city, or that she has enough familiarity with the human body to serve as an advisor in the case of a murder.  She has some high up connections as well, making her, for a mystery character, perfectly placed. read more

Lyndsay Faye is one of the more original, beautiful, bold and interesting new voices in mystery fiction.  Her novels are set in 1840s New York City when the police department was just being formed – and she’s being compared, inevitably, to Caleb Carr.  I think a more apt comparison would be to the historical novels of Hilary Mantel, who, like Faye, employs beautiful prose, tells a cracking good story, and drenches the reader in atmosphere and character development.

Her hero, Timothy Wilde, is a reluctant member of the brand new police force, who were given Copper Stars to wear (hence the term “Copper”).  As the book opens, Tim is a bartender, with savings, an apartment, and an eye on one Mercy Underhill.  In a second, his fortunes change, as his workplace and his apartment – complete with his savings, all in silver coin – are wiped out, and Tim wakes up in his brother Val’s apartment to also discover that a large part of his face has been burned.  He feels he has nothing now to offer Mercy and keeps away from her in shame. read more