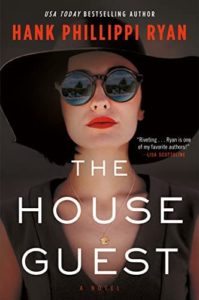 Awhile ago, I thought about the elements of a novel that make it a (good) suspense novel, rather than a straight mystery.  Hank Phillippi Ryan’s new novel, The House Guest, hits these marks pretty perfectly, so I thought it would be fun to enumerate them.  The first element, to me, is “upping the ante.”  By this I mean the main character has to have some kind of mission which is tied to a deeply felt allegiance.  In the case of this novel, the main character, Alyssa Macallen, is a society wife who has been unceremoniously dumped by her husband.  Because Ryan is excellent at making a reader care about her characters, you begin to care about Alyssa, as she’s living on a knife’s edge, unsure of which way her world will implode. read more 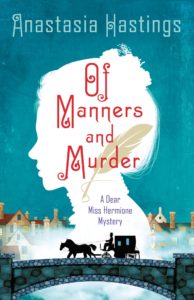 Of Manners and Murder, the first in Anastasia Hastings’ new series starring an agony aunt heroine, is far from the author’s first book. Anastasia Hastings is one of many pseudonyms for Casey Daniels, a veteran author with dozens of works to her name. Of Manners and Murder reads like it was written by a practiced hand. It opens with Violet, our heroine, discovering that her aunt, Adelia, is the most famous agony aunt in London in 1885. Adelia writes as Miss Hermione and has managed, for years, to keep the truth from everyone, including the two girls living with her. Just as Violet is given this information, Adelia leaves on vacation – and puts Violet in charge of answering her mail. read more 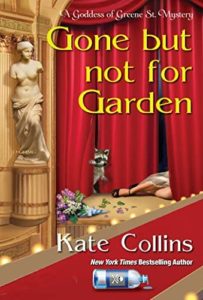 Kate Collins’ fourth addition to her Goddess of Greene Street Mysteries is Gone but Not for Garden. Readers will find themselves drawn in by main character and detective Athena Spencer. She has only recently opened up her own detective agency with her boyfriend Case Donnelly, works for her family gardening store called Spencer’s, and also posts a blog as a way to vent about her family and personal life struggles and triumphs. However, she does remain anonymous in her blog, and it is amusing to see her family discuss it with such interest. Anyone who has a large family can appreciate and relate to how Athena has both love for her family as well as frustrations. While her family means well, they often push Athena’s boundaries and exasperate her. She does her best to be considerate and kind, while also remaining firm with her family. They mean well, and their pushing clearly comes from a place of love. Athena’s awareness of this makes her all the more relatable to those with more complicated families themselves. Athena also has a son and pet raccoon that add both a humorous element to the story, as well as interesting plot twists later on. read more 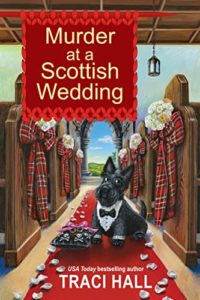 Murder at a Scottish Wedding by Traci Hall is a wonderful look into Scottish culture, and provides two very different mysteries that will have readers glued to the pages. Paislee Shaw is the detective in this series, and she owns a yarn business in Nairn known as Cashmere Crush. However, while Ms. Shaw has solved several murders in the three prior books, this one revolves around the wedding of her best friend Lydia. Thankfully, Paislee does not have to lose her best friend in order to prompt the investigation. Instead, the happy day is halted by the murder of a member of the wedding party. The death is also witnessed by an entire church full of wedding guests. When Paislee discovers that the victim was supposed to be Lydia all along.  When Lydia discovers this, she won’t be able to rest easily unless Paislee looks into the matter herself. Being a part of the wedding party gives Paislee access to both of the families involved, and gives her plenty of reason to speak with and look into everyone. read more 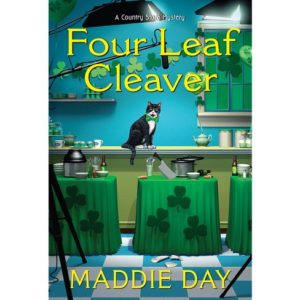 When looking for a murder mystery chock full of southern charm, look no further than Maddie Day’s Four Leaf Cleaver, the eleventh installment in her Country Store series. The main character and investigator is Robbie Jordan, owner of the local B&B Pans ‘N Pancakes. In an effort to give her B&B some publicity, Robbie is hosting a Saint Patrick’s Day themed cooking competition known as Holiday Hot-Off. From the start, the whole business shapes up to be more complicated and involved than Robbie had expected. From the staff of the show not getting along, to their manager and star Tara O’Hara being demanding and rude, Robbie is more than ready for it all to be over before it even begins. However, what no one expected was for the abrasive Tara O’Hara to be found dead in her upstairs room at Pans ‘N Pancakes on the morning of the big event. read more 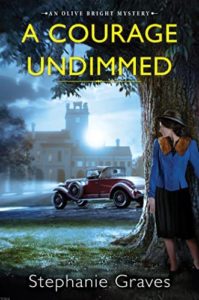 A Courage Undimmed is the third book in Stephanie Graves’ World War II series set in the British village of Pipley, Hertfordshire.  It features Olive Bright, pigeoneer and village sleuth, who serves as a FANY (First Aid Nursing Yeomanry) at the nearby manor house, which has been turned into Station XVII, a training facility for agents in a top-secret operation known as Baker Street.  Olive is in charge of her father’s carrier pigeons.  In the first book, she placed the pigeons in service with Baker Street after the National Pigeon Service rejected them because of her father’s abrasive personality.  The pigeons are dropped into occupied Europe along with the agents and carry messages back from them, about enemy infrastructure and troop movements. read more 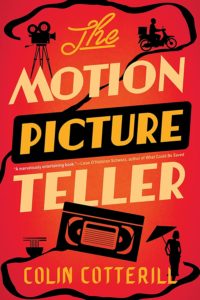 This charming mystery from Colin Cotterill’s innovative pen is not a murder mystery, but it is a mystery.  Set slightly in the past – 1996 – the action takes place mostly in a corner of Bangkok where postman Supot hangs out whenever he can at his buddy Ali’s video store.  This book will bring back a wave of memories of old video rental places and the pleasures of browsing the shelves and discovering a treasure.

While neither Ali or Supot make much money, they are united in their love of cinema, and their happiest hours are spent in the back of the store watching an old film like Casablanca. At one point, Supot thinks to himself: “He wondered if anyone had ever starved to death from enthrallment, dazzled to malnutrition by cinematic magic, not realizing they hadn’t eaten for a week.”  One night Ali and Supot’s viewing is interrupted by an old wino named Woot, who brings in a box of video tapes to sell.  Ali gives him a little bit of money, and as he and Supot go through the tapes, they discover an unknown (to them) movie called Bangkok 2010. read more 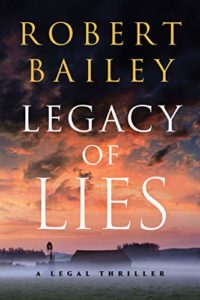 In February, we’ll gather on zoom on Sunday, February 19 at 2 p.m. to discuss Robert Bailey’s Legacy of Lies.  Publisher’s description:

A small-town attorney takes on prejudice and corruption in this powerful legal thriller.

Small-town lawyer Bocephus Haynes comes home late one night to find District Attorney General Helen Lewis waiting for him. Her ex-husband has just been killed. She’s about to be arrested for his murder. And she wants Bo to represent her.

There’s a lot working against them. Just before his death, Helen’s ex-husband threatened to reveal a dark secret from her past. Bo has been in a tailspin since his wife’s death. What’s more, his whole life has been defined by a crime committed against his family, and he continues to face prejudice as the only African American litigator in Pulaski, Tennessee. read more 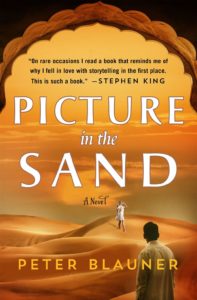 This sweeping, enjoyable epic by Peter Blauner isn’t really a mystery, though it has a crime at its center.  Like the Mrs. Pollifax books (which also treasure and honor different cultures), this is an adventure novel, containing a crime.  The premise is this: young Alex, the pride of his Egyptian-American family, accepted into an Ivy League university, had disappeared.  It becomes obvious to his family that he’s joined some kind of radical group somewhere in the Middle East. He refuses to communicate with his parents, but then his grandfather, Ali, reaches out to him and it’s this connection that Alex chooses to pursue. read more 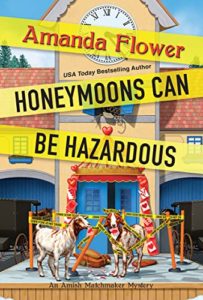 Amanda Flower’s Honeymoons Can Be Hazardous gives readers not only a suspenseful mystery, but also a unique look into Amish life, particularly how they live alongside and interact with the Englisch (what Amish refer those who are not of their faith), in the shared town of Harvest, Ohio. The town has always been relatively peaceful, but recently things have become unstable as there has been an increase in drug trafficking and use among both groups in the community. In a lovely display of camaraderie in the face of this new threat, everyone works together to fund and staff a community center where troubled individuals can go to get the help that they need. Everyone wants to protect the youth of their community, and to offer them education to help to avoid making desperate choices that could ruin, or even take, their lives. read more

"...you said that in this case nothing was missing. I cannot agree with you there.""Indeed?" He stared at her. "And what do you suppose to be missing in this case?""The truth, Mr. Haile." -- THE IVORY DAGGER, Patricia Wentworth (1950) ... See MoreSee Less

Statue of Columbo and his dog in Budapest. Reasons: unknown. ... See MoreSee Less