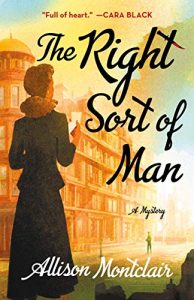 Our two central characters are Iris Sparks and Gwen Bainbridge.  Iris has a secret history of resistance fighting and espionage, none of which she can talk about; Gwen, an almost titled member of the upper classes, has lost her husband and is raising her son at her mother-in-law’s after a stint in a mental asylum.  She refuses to talk about it. read more