This is an excerpt from a talk I gave at the Graubner Library in Romeo, Michigan in 2012.

I got started reading mysteries, like many of you, with Nancy Drew. Nancy was just the “gateway drug” – after her I devoured Agatha Christie, then Sayers, then Marsh, and eventually my dear departed father-in-law introduced me to contemporary mysteries. I have him to thank for my love of Sara Paretsky, Lawrence Block, Dick Francis, Lillian O’Donnell, and Tony Hillerman. Since we opened our bookstore 20 years ago my reading journey has been a varied one, but I’ve always loved the suspense part of the genre. read more

The fictional narrative offers the reader a coherent plot and movement toward resolution within the context of the time period; a reassuring process that lends a familiarity to what might be new territory. Reading historical fiction we are forced to think of the past not as a simply a sequence of large-scale events but rather to understand the patterns, causes and consequences surrounding those events and how they impact characters we have hopefully come to know and care about for better or worse. Intertwining the personal narrative of a fictional protagonist as an actor within the historical context can provide for a powerful historical understanding. We don’t just read about a battle, we feel the weight of a pack digging into a soldier’s sweat-stained back. Historians such as Bruce Catton and Douglas Freeman, among others, have written excellent volumes on the American Civil War, but it is Stephen Crane’s Red Badge of Courage that today still stands as a defining description of what those terrible battles were like. read more 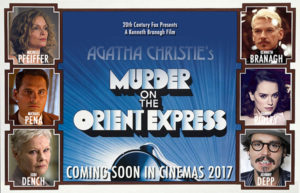 Every couple years the “public” rediscovers Agatha. As there’s a new film of Murder on the Orient Express due in the fall, non-crime readers have been looking for that particular book. In general, however, Christie remains our bestselling author as her appeal is timeless. I was thinking about the innovations she brought to crime fiction and thought about her plots, for which she is justly famous.

She came up several tropes that are still in pretty much constant circulation: the narrator is unreliable/the killer (The Murder of Roger Ackroyd); everyone is the killer (Murder on the Orient Express); everyone is killed (And Then There Were None); or someone long dead is found to be unjustly accused, causing an uproar in the present (Murder in Retrospect). Oh, and she also wrote a very early example of psychological suspense, Endless Night (1967). Though Josephine Tey wrote earlier versions of psychological suspense (The Franchise Affair, 1948 and Brat Farrar, 1949) Tey’s clung to some remnants of traditional detection. Christie’s story is so modern it could easily find a market today and it might be written by someone like Ruth Ware or Belinda Bauer (or, earlier, Ruth Rendell). read more 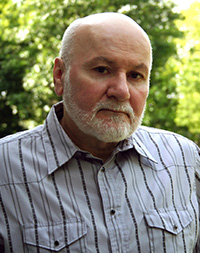 Loren D. Estleman feels as though he’s as integral to Aunt Agatha’s as our purple paint or over-stuffed bookshelves. We’ve been lucky enough to have known him for almost 25 years now. When we first met he was newly married to the lovely Debi, and ever since then he’s continued to write book after wonderful book.

When we first met him, he was hard at work on the spectacular historical series he’s nowfinished, each featuring a different decade in Detroit. Spanning from prohibition (Whiskey River, 1990) to the 80’s (King of the Corner, 1992), with both those volumes being stand-outs, he takes a look at race, economics, and culture as well as telling a memorable story in each volume. read more 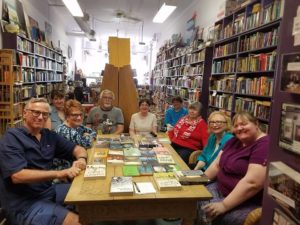 Our book club has been meeting for 23 years now, with inevitable changes in membership through the years. We have some members who have been with us from the beginning, and we always love meeting new people. Through the years our discussions have gotten more focused, though the discussions are always very passionate, one way or another! All of us, I think, have read books we otherwise wouldn’t have and through discussion have come to enjoy books we may have initially disliked. I asked our members about their participation in the book club and what stands out to them. For my part, I’ve enjoyed discussing the books I love with this wonderful group for over 20 years. read more 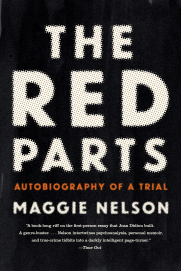 I recently read two great true crime narratives, The Red Parts: Autobiography of a Trial by Maggie Nelson and Jane Doe January: My Twenty Year Search For Truth and Justice by Emily Winslow, that started me thinking about the evolving way we look at crime. Both books demonstrate the seismic effect that advances in DNA testing have had on both prosecuting and narrating crime stories.

Maggie Nelson’s book of poetry Jane: A Murder, about her aunt was about to be published when she got a phone call from the police. Although she had never known her aunt, a University of Michigan student who had been killed thirty-five years earlier, the unsolved murder had resonated within her family and with the writer, who had obsessively sifted through the available sources about the killing and her aunt, including Jane’s diaries. But the Michigan State Police detective on the other end of the line revealed that DNA testing had suddenly revealed the one thing that only one living person knew previously—the identity of the killer. read more 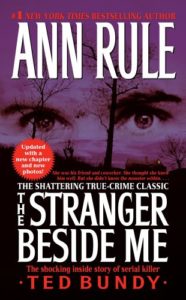 Most people on the planet know the “Ted Bundy” story (unfortunately). That alone does not make Ann Rule’s The Stranger Beside Me a true crime classic, though she relates the details of the case in her typically clear, well-told storytelling style. She’s one of the best in the biz, and this book illustrates the reason why. And on her telling of Bundy’s story alone, this would be a great true crime book. What takes it to the next level and makes it unique is the friendship she had with Ted Bundy, far pre-dating his notoriety. It’s her own change of feelings and attempt to understand what happened that make this book a standout. read more

As you’ve perhaps noticed, we don’t pan books in the newsletter. We’re here to sell books and advance the mystery genre, after all, and if we don’t like a title, there’s no point in publicly knocking it when there are so many other mysteries that we DO like and are more than happy to recommend and sell. I just finished a recent release that seemed promising and began pretty engagingly, but by the time I reached the end, had me wanting to throw it against the wall. I then read a review by a mystery maven who I admire, and was quite surprised to find that she praised it, not as a mystery exactly, but as something she could relate to and a fine example of a “literary thriller.” read more 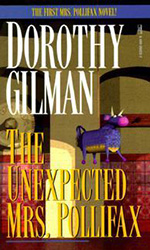 I have been feverishly re-reading Dorothy Gilman’s Mrs. Pollifax books – it’s been long enough that I don’t remember the particulars, but I do remember how much I enjoyed Mrs. P, though in my memory she was a bit softer than she actually is on the page. Gilman’s portrayal of her in the very first book, The Unexpected Mrs. Pollifax (1966), is one of the best first mysteries ever. The set-up is clever – an older woman, unsatisfied by life, goes to the CIA to volunteer her services. When the CIA’s Carstairs sees her in the waiting room he thinks she would be the perfect innocent abroad. And through 13 books, she was. Gilman lays down her adventure story format leavened with Mrs. Pollifax’s generous yet knowledgable heart in the very first book and the formula holds. Gilman often provides the reader with surprisingly penetrating insights into human behavior, courtesy of Mrs. P; one of my favorite moments involves a Whirling Dervish (Mrs. Pollifax and the Whirling Dervish, 1990). Re-discover her for yourself. read more 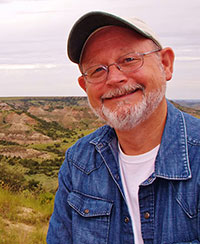 William Kent Krueger visits us this September, appearing, as he has with nearly every one of his now sixteen novels, at Aunt Agatha’s.  This lucky association started for us back in 1998 when Kent called and invited himself to the store to sign copies of Iron Lake.  I was delighted with Kent and his books back in 1998 and I still am today.  In between, our tiny staff  have all become hard-core Krueger fans and have relentlessly pressed his books on almost every reader we can think of.  Every one of them comes back for more.  Even my brother, a mystery reader who doesn’t remember authors, asks about that “Minnesota guy.” read more