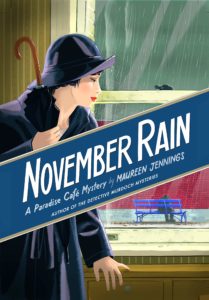 This is the second entry in Maureen Jennings’ Paradise Café series, set in almost wartime Toronto (1936).  Detective Murdoch’s son, Jack, is now the “Detective Murdoch” in this series, which centers on young Charlotte Frayne, who has joined up with an older private investigator, Mr. Gilmore.  Mr. Gilmore is out of town as the story opens.

Charlotte arrives to open the office and discovers two women waiting for her, both of them in heavy mourning.  As Jennings lays her story parameters out in this first chapter, I think her rare capacity for both breaking a reader’s heart and reaching it have never been more strongly on display than they are here.  The women relate the story of the suicide of Gerald Jessup, the son of one and the wife of the other. read more