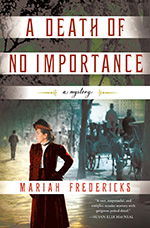 Mariah Fredericks wrote one of my favorite books of 2018, A Death of No Importance, featuring Jane Prescott, maid to the wealthy Benchley family in 1910 New York.  The next book in the series, Death of a New American, will be published in April of 2019. and it’s every bit as terrific, vital, and hard to put down.  Mariah was nice enough to answer a few questions about her books.

Q: I like that you include the Titanic but it’s just almost background. Did you feel that as you were writing a novel set in 1912, it had to be a part of the canvas? How did you approach it? read more