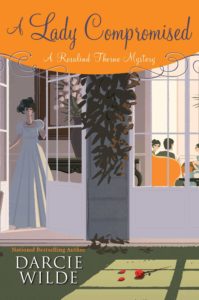 A Lady Compromised is the fourth book in the Regency mystery series by Darcie Wilde (a pseudonym for Sarah Zettel) featuring Rosalind Thorne, a gentlewoman living in reduced circumstances after a family scandal.  To make a living for herself, Rosalind helps society ladies solve their problems, which, in this book and the others in the series, include murder investigation.  At the beginning of this book, Rosalind travels to Cassell House, the country estate of Devon Winterbourne, who has recently, and unexpectedly, inherited the title of Duke of Casselmaine following the untimely deaths of his father and older brother.  Rosalind and Devon had been close to becoming engaged before Rosalind’s father’s disgrace, at a time when Devon was a second son, with no prospects of inheriting the dukedom.  Now his cousin, Rosalind’s friend Louisa, is getting married, and Rosalind is looking forward to attending the wedding and possibly rekindling her romance with Devon. read more