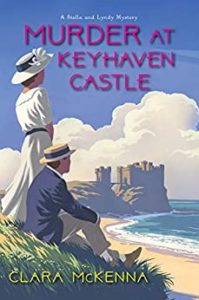 Murder at Keyhaven Castle is the third book in Clara McKenna’s Stella and Lyndy mysteries, set in the New Forest area of England in 1905.  I had not read the two previous books, but McKenna gives the reader enough background that I had no problem getting into the book, and I enjoyed it so much that it made me want to read the others.

Stella Kendrick is the daughter of a wealthy horse farmer from Kentucky.  Her overbearing, social-climbing father, who had never shown her any love, had taken her to England, ostensibly to buy horses, but really to marry her off to Viscount “Lyndy” Lyndhurst.  Lyndy’s aristocratic family has lost their fortune.  I was never sure exactly why, and that was probably explained in the earlier books, but it is suggested that Lyndy’s father wasted the family’s money.  Stella’s father wants the social connections an aristocratic title would bring.  Needless to say, neither of the young people was consulted at the time their fathers planned their engagement.  Luckily for them, they fall in love with each other, even though Lyndy’s snobbish, traditionally-minded parents disapprove of Stella’s unconventional ways.  Stella and Lyndy share a love of horses and, as it turns out, crime solving. read more