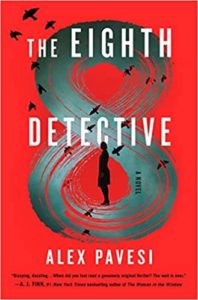 Pavesi’s central character in the novel, Grant McCallister, lives a hermit’s life on a remote island.  Twenty years ago, he’d written a book called The White Murders, published in the early 1940’s.  The book in our hands is a series of short murder mystery stories, interspersed with McCallister’s mathematical analysis of the murder mystery. There are a certain number of required elements and within this structure – and, as mystery readers everywhere already know – there are endless variations. read more