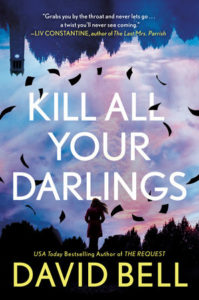 Nobody does a great set-up for a thriller like David Bell, which is not to say he’s shabby at the execution either. His latest, Kill All Your Darlings, is no exception, starting with an irresistible premise — English professor Connor Nye is on the wrong side of publish or perish when a great novel lands in his lap. It was written by one of his students who turned it in as her thesis and then promptly disappeared. He polishes it up and publishes it under his own name. Unfortunately, it contains details about an unsolved murder that only the murderer would know. And then the student shows up in disguise at one of his readings. read more