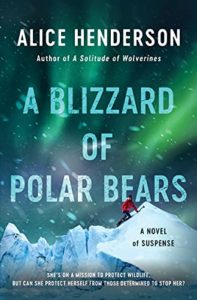 These books – two so far – are a mix of adventure, climate change despair, and appreciation and love of the natural world and the creatures that share the planet with us.  In the first book, Henderson’s protagonist, Dr. Alex Carter, left Boston to study wolverines in Montana.  As that study winds down in book two, she’s delighted to get a call from a colleague, asking her to fill in for her on a polar bear study in Churchill, Manitoba.

Thrilled, Alex jumps at the chance and hops on a plane.  She’s used to solitude and her main points of contact are a buddy who is an actor and her father.  While Churchill would be no one’s idea of the big city, to Alex, it almost is, as she’ll be working at a large center with other scientists.  She’s happy enough to be able to stay in a motel on her own instead of the center’s quarters. read more