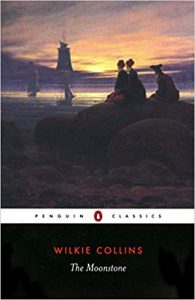 For our March book club, we’ll read Wilkie Collin’s 1871 classic, The Moonstone.  We are meeting on Thursday, March 26, 6 p.m. at Seva, which is at Westgate shopping center.  This book is Victorian so the writing is more flowery and detailed than you might be used to but the story it fantastic and the basis for so many other detective stories throughout history.  From a review on NPR by Chitra Divakaruni in 2013:

“I was struck by how masterfully Collins pulls together the different strands of a complicated plot. T.S. Eliot called The Moonstone “the first, the longest, and the best of the modern English detective novel.” I could see why. Reading the book was a little like seeing the Wright brothers maneuvering their first aircraft, except there was no awkward bucking, no crashes. read more 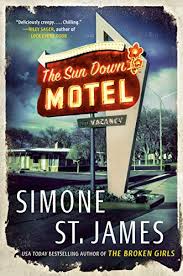 Simone St. James is one of the best of all modern gothic novelists, and importantly, the ghosts in her books are real, they’re not actually mysterious human strangers hanging around in vacant buildings for nefarious reasons.  She combines her ghost stories with cracking good mysteries, an irresistible combination, and unlike practically any other mystery novelist, the characters are pretty much exclusively female.  There are a few male characters for sure, but they are more on the window dressing side of things.  It’s the ladies that carry the narrative. read more 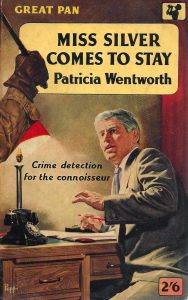 In the golden age, Patricia Wentworth stands out, as she always foregrounded romance as part of her stories.  Unlike some of the other authors I’ll mention, she wrote a series, but the romantic characters didn’t recur or involve the main characters, with one exception: Miss Silver Comes to Stay (1948), where Rietta Cray and Randal March, a former pupil of Miss Silver’s and now a Chief Constable, find slightly late in life love.  March is a re-occurring character, and he and Rietta appear in other books, complete with a family to Miss Silver’s doting delight.  Love in a Wentworth novel is quiet, intense and somehow dignified. read more 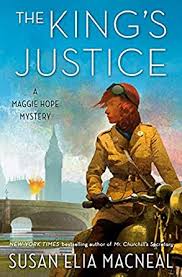 As I was writing my review, instead of adding “Susan Elia MacNeal” as the author, I almost typed “Maggie Hope,” so indelible and real has this character become.  Maggie, the red haired spitfire who began the first book as Churchill’s secretary, has now left the SOE (Secret Executive Organization) after being sequestered on a Scottish island (see The Prisoner in the Castle).  It’s now 1943 and she’s defusing bombs for the war effort. read more 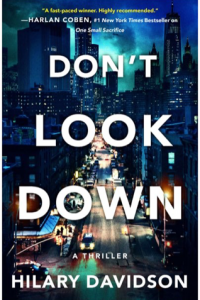 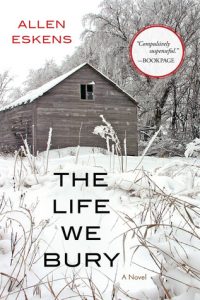 Join us at Seva (Westgate shopping center) on Thursday, February 20, at 6 p.m. to discuss The Life We Bury by Allen Eskens.  All are welcome!  In March we’ll be discussing The Moonstone by Wilkie Collins.

The publisher’s description:  College student Joe Talbert has the modest goal of completing a writing assignment for an English class. His task is to interview a stranger and write a brief biography of the person. With deadlines looming, Joe heads to a nearby nursing home to find a willing subject. There he meets Carl Iverson, and soon nothing in Joe’s life is ever the same. read more

There are two main story threads in this book.  One involves a young Arab boy found dead, stuffed in a garbage bin.  The police are having a hard time locating any ties for him, and of course he turns out to be a refugee, with a particularly heartbreaking backstory. read more 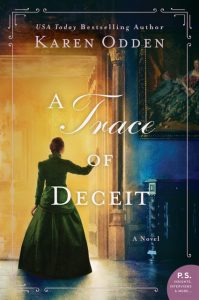 A Trace of Deceit is the third Victorian mystery by Karen Odden, who has taught at the University of Michigan.  It is a suspenseful, compelling novel set in London’s art world in 1875.  The protagonist, a talented young painter named Annabel Rowe, is one of the few female students at the Slade School of Art, one of the only art schools to admit women at the time.  When she goes to visit her brother Edwin, she finds the police in his rooms, searching through his belongings.  Of course, Edwin has been murdered, and Annabel, while shocked, is not wholly surprised.  Edwin, a brilliant young artist, has led a dissolute life of gambling and drug use, and had recently been released from prison, where he spent time for forgery.  Annabel and Edwin were close as children, but had grown apart after Edwin left for boarding school, and he had hoped to rebuild his relationship with her.  Annabel wants to believe Edwin had reformed, but she is not always so sure, and she blames him for their parents’ deaths, because they died of a fever they supposedly caught from Edwin after one of his visits to an opium den. read more 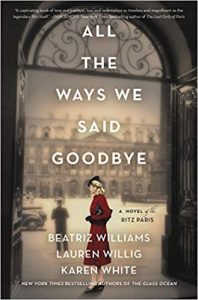 Williams, Willig and White, three bestselling authoresses who write historical adventures, romances and mysteries, have teamed up for the third time to write a wonderfully rich novel with a through line of the Paris Ritz.  Being a hotel brat myself, I enjoyed this method of tying the novel together.  It has three separate storylines, each focused on a different woman – one in 1914, one in 1942, and one in 1964.  In the two earlier storylines, there’s a woman who lives in a suite at the Ritz. She’s the first character’s mother and the second character’s grandmother.  The tie the third woman has to the first two is more tenuous and is one of the mysterious threads of the novel. read more