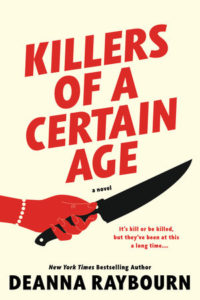 This book is an absolute blast.  Hilarious, well plotted, exciting, packed with interesting characters, it is definitely the most fun I’ve had reading a book all year.  As I have read a few books lately with detectives who are on the older side, I thought I knew what to expect, but I was so, so wrong.  Raybourn’s “Killers” are 60 something female assassins who are on a retirement cruise. They are a little puzzled by the cruise but are determined to enjoy each other’s company, the food, and the booze. Their collective bad-assery is a far remove from Jane Marple’s.

The retirement cruise goes badly wrong, however, when one of the women notices a fellow assassin on board, working undercover as crew.  They realize there’s a hit on them and they then go to elaborate lengths to escape while not harming anyone else on the ship (one of the rules of their operation: no collateral damage).  They do escape but then they are faced with a dilemma: their organization, for some reason, wants to kill them, and they no longer have the back up and resources they enjoyed as assassins working for their “firm”, referred to as “The Museum.”

Raybourn goes back and forth in time, setting up her story.  The four women were all recruited around college age and whisked to a “school” in England where they learned their trade.  The woman in charge of the school wants to unleash some female furies on the world, ridding the world of Nazis and other unsavory types.  Nazis start to die out of course, but the women are kept busy never-the-less.  The women, who were recruited in the mid to late 1970’s, are now old enough to feel it in their knees when they are on a strenuous job.

Raybourn then proceeds to pepper her story with short little jewels – stories where the women ply their trade, then and now.  Each episode is so delicious it’s almost sad when they reach their inevitable end.  The smarts it took to put these vignettes together is massive.  Every detail is perfect, and often funny.  My favorite was when the quartet dress as nuns, but you have to read it for yourself. Each episode also, miraculously, advances the plot and fleshes out the characters.

While the women are without their more or less corporate back up, they are not without resources.  They still have all their different skill sets, and they have Minka, a young Ukrainian who lives with Billie in her wreck of a safe house in New Orleans.  Minka’s got game and a bit later in the story she’s responsible for one of the most hilarious phone apps of all time.  Again, you’ll have to read it for yourself, I won’t ruin it for you.

When these women team up, they are unstoppable.  They all have issues – for example, one is a widow; one hasn’t told her spouse exactly what she does for a living – but they work through it.  Their training holds as they meet their challenge, and it’s a blast watching them do it.  If you are of a “certain age” yourself, you’ll appreciate the references and the sore knees.  Run, don’t walk, to pick up a copy of this book.