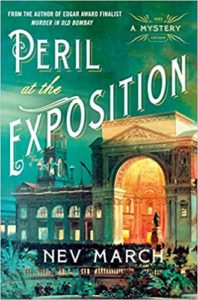 I am a huge fan of Nev March’s first book in this series, Murder in Old Bombay, but I am a little sad she moved her main characters and newlyweds Jim Agnihotri and Diana Framji from Bombay to Boston.  They are wonderful, vivid characters with an interesting relationship, and in many ways this is Diana’s book, while the first book belonged to Jim.  As the book opens Jim is letting Diana know that he’s heading to Chicago on a job – he works for the Dupree detective agency – and that he’ll be gone awhile.  That’s really all she knows.

The weeks pass and Diana, lonely in her new city and very much missing her husband and worried about him, heads to his bosses to ask where he might be and just what she can do to find him.  It appears he’s disappeared completely, and Diana wrangles a job out of the Duprees (father and son), and heads to Chicago after cashing out her bank account and saying goodbye to the friends she’s made in Boston.

This is very much an immigrant’s story from the inside out, as we follow Diana’s journey.  She’s homesick, but longing to know just what it is Jim finds so appealing about America.  She’s startled by the racism she encounters.  (It’s 1893, but some things don’t seem to have changed all that much.)  She takes an African American man with her who works for the agency and encounters a woman on her travels who she hires as a companion, as it seems she knows her way around the city.

The book takes place during the World’s Fair and Chicago is filled with wonders as well as, apparently, unrest.  March is excellent at setting the stage and the background of the fair is beautifully rendered and brought to life.  So are the lively streets of Chicago.  A friend has set her up in a lovely hotel, but the street encounters Diana has as she searches for Jim are a little less lovely.

This is a complex book. It seems that anarchists may be attempting to place a bomb at the fair.  Diana has a partial letter translated from German that indicates a serious number of explosives.  As the book progresses, so does Diana’s search, and Jim eventually appears.  She has brought him danger unawares, but the two are an excellent team, balancing each other in many ways. March is a smart writer, and her complicated plot is a clever and satisfying one.

I love Diana’s bravery and smarts, and the way she and Jim are getting to know one another as husband and wife.  The early passion of their romance is carrying through to a seemingly solid relationship.  I love the way March writes about the very new America, still wet behind the ears, full of contradictions, violence, and unexpected kindness to strangers.  I love her inclusion of surprising characters (especially for the time period) and I love the way she tells a mystery combined with romance and adventure.  I am very much looking forward to seeing where Diana and Jim end up next.