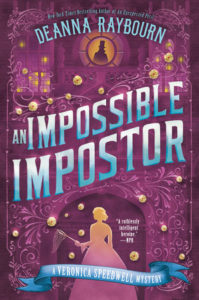 I’m a huge fan of Deanna Raybourn’s Veronica Speedwell series, but in every series, there are always one or two books that have a bit more sparkle than the rest.  For me, it’s this book, which combines all of Raybourn’s many gifts into one completely delicious package.  In book seven of this series, lepidopterist Veronica has settled in with her beloved Stoker, in an extremely unconventional arrangement for the time (Victorian Britain): they live in sin, and Veronica is very much a working woman.

Because Veronica is the illegitimate daughter of the Prince of Wales, she has no family to disappoint, and Stoker doesn’t really fit into his own family.  The two ae the perfect outside-insider detecting couple.  They know how to navigate in society, but they aren’t exactly “of” it.  In this case they are asked to travel out to the countryside to see if Veronica can identify someone who has turned up claiming to be a man who died in a volcanic eruption several years ago.  He was a friend of Veronica’s and hopefully she’ll be able to recognize him.

He’s appeared as the head of the family after the family had assumed his death, and his younger brother, along with his wealthy wife, have taken over the family seat and are very busily underway with their desired renovations.  The godfather of the oldest sister, Effie, has asked them to have a particular care for her.  She’s a budding astronomist whose dreams are being quashed by her conventional sister-in-law.

Their cover is that they will be taking a look at the collection left behind by the grandfather of the family, specimens he acquired in his travels around the globe.  Stoker, a gifted taxidermist and devoted student of the natural world, is excited by the prospect of discovering a rare Tasmanian Tiger, a species now extinct that was rare even in the 1880’s.

The family is accepting the man’s identity as he appeared on their doorstep in great distress, and they took him in to nurse him.  When he woke up he appeared to recognize his grandmother, and as he was the unpleasant, imperious old lady’s favorite, she’s all in.  Veronica and Stoker are very much stepping in to a fraught family situation.

There’s a delightful twist early on, and the cleverness of the plot continues to unfold.  Raybourn is a wonderful combination of an adventure writer, a romance novelist, and a straight up mystery writer as the plot is very much the thing.  To say much more about the story would be to give away things that readers should be lucky enough to discover for themselves.

I will say that one of the strong gifts of a long series is the way writers can develop characters over a period of time, giving them depth and humanity that I’m not sure can always be achieved in a single novel.  In this one, Raybourn gives the reader even more of an insight into Veronica and Stoker’s relationship, what holds it together, and what has the potential to tear it apart.  There’s some lovely writing here, writing I won’t soon forget.  This book is a standout in a strong series.