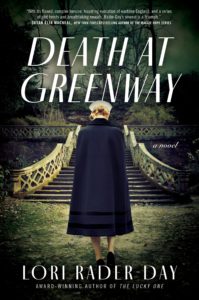 The most towering figure in mystery fiction is Agatha Christie.  She created and influenced countless plots and tropes, and invented iconic detectives.  Surely no mystery writer can set a pen to paper without feeling in her debt.  Re-paying this debt with her impressionistic Death at Greenway is Lori Rader-Day, a writer known for multiple point of view novels and indirect storytelling.  Her style could not be further from Agatha’s, but – there’s still that debt to be paid.

The book is set during WWII at Mrs. Christie’s summer home, Greenway, in Devon.  During the war the Mallowans (for that was Agatha’s married name) lent their house to a war nursery – or to children evacuated from London, cared for by nurses.  Rader-Day has chosen to focus her story on Bridget Kelly, a failed nurse in training, who takes up the war nursery job out of desperation.

Bridget, or Bridey as she comes to be known, as her fellow nurse apparently has the same name (she’s called Gigi), is suffering from we would now call PTSD.  Her entire family has been wiped out in a London bombing, and she’s not sure where she fits or belongs.  Her trauma comes out at different points in the story, believably so, as she sees something awful or is simply overwhelmed at one time or another by her grief.

This is more of a war novel than a mystery, though there are several deaths, red herrings, and plot twists.  The power of the book lies in the writing, and the creation of an atmosphere and a feeling of being there with the characters as they live through war.  What must it have been like to live through a war?  Rader-Day gives the reader a vivid picture, from the bombs that do fall in Devon (the children and nurses huddled in the Mallowan’s living room), the traumatized man in the pub who has lost his son, the recollections and uncertainties of everyone in the small village who have all been touched, one way or another, by the war.

The story has a long timeline, opening in 1941 and ending in 1946 (more or less, there are some codas), which gives scope not only to the war itself but to Bridey’s change and growth as she becomes more sure of her calling as a nurse, sorts out her feelings for the children – she’d been told not to love them, but of course she does – and gains some confidence as well as a true love for Greenway, even though she had went there reluctantly to begin with.

She and her fellow nurse, Gigi, could not be more different.  Bridey is green and young; Gigi is older, beautiful, and more sophisticated; but the two of them, mostly from shared experiences in close quarters, come to be fond of one another. The book is also a story of their friendship and what happens to friendship when tested by trauma.

Reading the book, I gained a real picture of what Greenway must have been like, as well as a picture of the Devon countryside, which, then as now, was not untouched by trauma, grief and disaster.  Every reading experience is different, and every reader is seeking a different experience when they read.  If you’re looking for lovely prose, a feeling of the time, and an enigmatic if fascinating main character, this is the book for you.