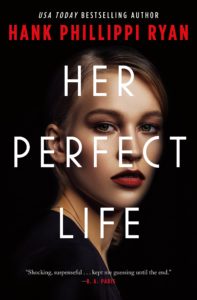 This book will be published on September 14.

Hank Phillippi Ryan’s story telling style is so smooth, her books fly through your reading fingers faster than you can think, almost.  This novel may be the most emotional, heart felt story in all of Ryan’s books.  It’s the alternating story of big sister, Cassie, and little sister, Lily.  While the book opens with Lily telling the reader how perfect her sister is, it fast forwards in time to Lily’s life, which does seem actually perfect.

Lily has grown up into well known investigative reporter Lily Atwood, a beautiful, single mother living in a swanky area of Boston.  She has the perfect daughter, Rowan, the perfect nanny, Petra, and the perfect assistant, Greer. But, Ryan seems to be asking, is anyone’s life actually perfect?

Back when Lily was seven, Cassie had gone to college and disappeared, leaving behind a grieving mother, grandmother and of course, sister.  Lily has grown up looking everywhere for Cassie, always looking over her shoulder, thinking is that my sister? Is that her?  It’s something of an obsession, understandably so.  This book is the story of this search coming to a head.

Lily’s other obsession is Rowan, and keeping her safe.  Rowan’s dad is not a part of her life. Lily is perfectly plugged in to Rowan’s schedule, school, activities and friends, despite her busy career, a career supported and made possible by Greer, who toils in the background.  Greer doesn’t resent this, though she does seem to resent the fact that she feels she works harder than Lily does.

I think that’s a splitting hairs question, but it’s definitely how Greer feels, and it fuels some of the events in the book.  As Ryan alternates her narrative between the three women, something at which she excels, she plays out their stories by going back and forth in time and between the three of them.  Because Ryan has given each woman a distinctive voice and personality, the switching is seamless.  In less skilled hands, this could have been confusing, but instead, it’s suspenseful.

It also packs an emotional punch.  As readers, we not only feel Lily’s grief at losing her sister, but her fears of keeping Rowan safe and out of the spotlight, away from prying eyes.  We see her balancing act as fans approach her on the street, and her graciousness in responding to them.  But the balancing seems difficult.

As readers, we follow Cassie’s story and slowly learn what happened to her as a series of not even bad decisions, but just ones that were slightly off, send her life completely off track.  And, as mentioned, we see Greer’s frustration which I felt was also a thinly veiled jealousy.  There are few more destructive emotions, in my opinion.

As Cassie, Lily’s, Rowan’s and Greer’s stories begin to intertwine and create conflicts, the suspense of the story ramps up and up.  Lily is not sure who to trust, which is a noir story telling attribute, but Ryan’s essentially optimistic world view prevents her from being a noir writer.  While the end of the story questions if anyone has a perfect life, and doesn’t tie everything up in a bow, it is still not lacking in hope for the future.

I found all of the characters appealing and well drawn, which again, is not noir.  In a noir novel every one of them could have been made awful and disagreeable.   To my mind, Ryan bucks trends and embraces her own inner voice, which lends her books a strength and appeal that I don’t find in much contemporary domestic suspense, and it makes me revere and enjoy her books all that much more.  This is a wonderful read, one you won’t be able to put down, and one you will probably end in floods of tears.