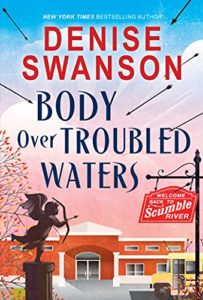 Cozy writers have to strike a tricky balance between addressing an issue but not being too harsh with it.  In a bravura first sequence, Skye is attending a meeting with Superintendent of schools Shamus Wraige, who has unceremoniously fired the school security officer because Scumble River is a small town and “It’s not as if anyone here is going to pull a Columbine or a Sandy Hook.”

Skye is horrified and mentally begins writing a memo outlining the statistics of school shootings and why a security officer is necessary.  The officer has been replaced by Wraige’s son, Tavish, who will function as an “attendance” officer.  As Skye hurries to speak with Dr. Wraige after the meeting, the school goes into an active shooter lockdown.

How to balance this type of situation in a cozy?  Masterfully, Swanson folds in Skye’s husband, Wally, the town police chief (who of course is worried about his wife) and when the culprit and situation are tracked down, the whole thing turns out to be much less hazardous than it sounds.  I won’t spoil Swanson’s set up, but I will say it involves Scumble River’s notorious, troubled and hilarious Doozier family.

While the school shooting issue is addressed in a cozy manner, Swanson diffuses it with humor and then springboards from this situation to the main situation in the novel, which involves Shamus Wraige.  Because Swanson has used her opening to shade in Dr. Wraige’s personality, when she starts describing the petty thefts he has suffered and finally the theft of his car, a situation which brings the mayor down on Wally, as readers we are as bemused and irritated by him as are Skye and Wally.

When Wally is called to look into a suspicious noise at Wraige’s house and discovers him dead, he calls in Skye, in her function as a consulting psychologist to the police department.  This is another thing I think is really well done in these books – Skye’s connection to the investigation not only uses her skill set, but it’s believable, as she is actually a paid police consultant.

The resulting investigation is clever and well thought out, zeroing in, golden age style, to very few suspects.  As readers, we also get a chance to catch up on Skye and Wally’s happy home life as recent newlyweds and the parents of twins.  Twenty-three books in, readers are familiar with the community surrounding Skye, and it’s filled with great characters from Skye’s mother to her librarian friend Trixie to a pathologist named Doris Ann Norris.  Doris Ann was a real-life librarian well known (and loved) in the crime community who passed away a few years ago, and it’s a real delight to encounter her again in print.  It actually brought a tear to my eye.

In person, Denise Swanson is a thoughtful, calm, kind and intelligent woman, and those traits are certainly reflected in her main character and alter ego, Skye.  One of the running themes of the books is the basic decency of both Wally and Skye.  While I worried as a reader that some of the energy in the series would be diffused when Skye and Wally at last got married, I should have trusted Ms. Swanson.  As her many fans and readers know, she has a sure hand at the story telling helm.  This is another delightful entry in a beloved series.