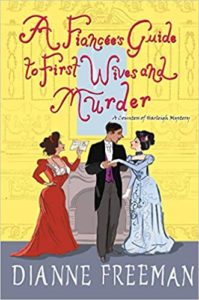 This novel will be published on July 27.

The sparkling fourth installment to Dianne Freeman’s insanely enjoyable Frances, Lady Harleigh series finds the intrepid Frances on the verge of marriage to her beloved George, only to discover, practically on the eve of her wedding, that George’s wife has appeared. Of course, it’s a misunderstanding, but the social damage is done.  Irena, the woman making the claim, appears not only demented but in danger, as she’s been receiving threatening letters.

When Irena’s marital status has been more or less cleared up (and to give it away gives away a portion of this clever plot), Lady Harleigh  agrees to take her in while George looks into the matter.  Frances and George get to sleuthing, but unfortunately the next day Irena is discovered dead in Frances’ garden.  Things look bleak for Frances and George as the police, while friendly to them both, cannot help but suspect one or the other of them of murder.

Irena was a Romanov from “the wrong side of the blanket” and had been farmed out to a French couple to be raised.  As it happens, Grand Duke Michael Mikhailovich and his wife are visiting London (it’s November of 1899), and the Grand Duke was Irena’s grandfather. The Grand Duke, who married for love, is on the outs with his family but he still reaps the financial and social benefits of his title and position (everywhere but Russia).

Invited to a soiree with the Grand Duke, Frances decides to approach the couple to see what she can find out.  Irena is a mystery to her and the more she knows about her, the better chance she might have of figuring out just what happened.

Freeman has a deft hand with narrative and a sure one at portraying the ins and outs of the complexities of high society at the time.  Frances is beginning to be shunned because of the scandal attached to George’s supposed wife turning up, and even though she firmly takes matters into her own hands, the gossip and whisper campaign is fierce and brutal.

In a bravura scene about three quarters of the way through the book, Frances girds her loins to enter a reception for the Grand Duke, George at her side.  As Frances puts it to herself “Every species has a way of culling the heard.  Anyone not rich, powerful, or clever enough to survive a scandal would be discarded, left behind, culled. It happened all the time.  I wasn’t rich or powerful, but I liked to think I was clever.”  The scene is infused with all the suspense and drama that a noir novel might have in a fight or a shootout.  Tension is high, and Lady Frances is every bit as clever and brave as Jack Reacher as she navigates and conquers the shoals of society.

The mystery part of the novel is golden age in that there is a pretty tight circle of suspects, every clue has a purpose, and the resolution is suitably surprising yet also makes sense.  The characters are interesting and sharply defined, the societal milieu is beautifully portrayed, and Frances is every bit the intelligent, independent woman who has found her soul mate in George.  This series has quickly become a favorite of mine.  Freeman is a total natural at telling a story, keeping things moving, and keeping her reader engaged.  And like every good mystery series writer, there are several threads to look forward to in the next novel, which cannot come too soon.