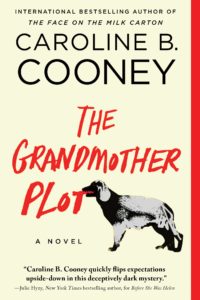 This was a blast of a read, akin to the kind of great caper novels written in the past by Donald Westlake, and more recently by talented writers like Jeff Cohen and Catriona McPherson.  This is a caper novel with a broken heart at the center.  While Westlake stuck pretty strictly to the caper element, Cooney brings the reader in emotionally as well.

The story centers on sweet, stoner Freddy, who makes glass beads and pipes for a living, and who has ended up caring for his grandmother who has dementia.  Freddy is a regular visitor to his grandmother’s memory care home and knows the staff and patients well.  He slips in the back door of the facility and doesn’t sign in, doing this, like everything in his life, just off the grid.

He lives in his grandmother’s house, collects his dead mother’s social security, and drives his grandfather’s cars without a license and uninsured.  Because he smokes so much weed his short-term memory is not always great and he’s terrible with details, but he loves his grandmother and visits every day without fail.

He takes her for walks in her wheelchair and agrees to be remembered as her long dead son, Arthur. He loves blowing glass and is clearly an artist.  He takes his beads to bead shows and ekes out a bit of a living, though there’s more money in the glass pipes he makes.  He’s gotten into a bit of trouble: a mover and shaker has asked Freddy to take him on as a “partner” at bead shows, supplying Freddy’s entry fees and travel expenses, but what he’s really doing is having Freddy launder money for him.

When Freddy first agreed he felt it was no big deal but now he wants out, and the man’s goons are after him.  There seems to be no way out from this terrible deal.  When someone is murdered at his grandmother’s memory care, Freddy is sure the goons are behind it, though everyone at  the facility suspects the husband.

Freddy’s parallel universe of glass blowing – which supplies the action – and the universe of dementia patients at the memory care home work on parallel tracks to power the narrative.  One minute you’re breaking your heart over the descriptions of the patients and what the families go through, the next Freddy is picking up someone’s difficult, bite-y dog because that someone has been arrested.

This book had humor, heart, and a great plot, and most of all it had Freddy, who, like all of us, is not only doing the best he can, but has his heart is in the right place.  I ended the book with an appreciation for the love Freddy has for his grandmother but for the portrayal, on Cooney’s part, of this difficult and heartbreaking aspect of aging.  She’s a clear-eyed storyteller and seems omnivorous in her interests.  She’s as interested in Freddy’s glass blowing (you will be too) as she is in the details of caring for an aging relative, and what it might mean to have a goon on your tail. I was both surprised and delighted by the ending.