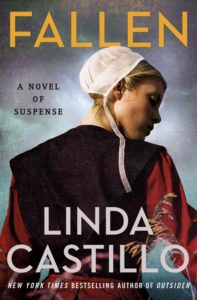 It’s amazing to me that Linda Castillo can work within such a tight construct and still, every time, produce an original and thoughtful book.  Her set up: Chief of Police Kate Burkholder, who has grown up Amish, is the insider/outsider head of law enforcement in tiny, Amish centric Painter’s Mill, Ohio.  She has connections with the Amish but they don’t fully trust her as she’s left the faith, but she still has insider knowledge of the culture that help her to solve the crimes that occur in her community.

And boy, are those crime numerous and brutal!  To meet the lovely, soft spoken Castillo, it’s a surprise how gory and violent her books can be, though the violence is always balanced by Kate’s decency.  The book opens with the truly horrific murder of Rachael Schwartz, a “fallen” Amish girl – her acts are so far outside the boundaries of Amish culture that she’s viewed as unsavable.  When she’s discovered beaten to death in a Painter’s Mill hotel room, however, Kate, who knew her as a child, is outraged and determined to find out who did this to her.

Through flashbacks and interviews with friends and family, Castillo creates a portrait of Rachael as impulsive and somewhat ruthless in her dealings with other people, but so charismatic she inspires loyalty.  One of those people who has earned her loyalty is her opposite:  shy good girl Loretta, her childhood friend, who was tempted by Rachael as well as protected by her.

In portraying these two opposite characters Castillo is able to get at the yin and yang of Amish culture, the good and the bad, and illuminate it from all sides.  It’s certainly seems appealing to live within a community where you are accepted and cared for your whole life, with a central guiding principle.  The flip side, of course, are the restrictions and judgments that come with it and that must be accepted to live comfortably inside the Amish framework.  Rachael was unable to live with the restrictions and has long been estranged from her family.

Castillo is a top notch thriller writer.  She creates suspense, she provides clues and an interesting investigative process, and she always includes a good twist.  Her books are insanely readable.  I was especially taken with this one.  Rachael is a fascinating character and Castillo’s musing at one point – about the foundation a parent can instill, for good or ill – is interesting as Kate speculates that Rachael’s parental foundation was too strict and unyielding.

A thriller writer who gives the reader something to ponder as they read really can’t be beat.  I was annoyed to have to leave for work as I got to the end of the book, because I did not want to put it down until I finished it.  Is there a better reader endorsement?