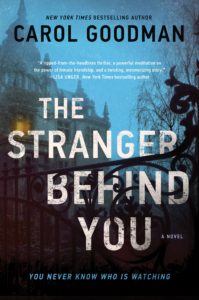 I loved Goodman’s novel last year, The Sea of Lost Girls, and I love this one even more.  It’s very of the moment, as it involves a powerful newspaper magnate who has been sexually harassing his female employees.  Like last year’s novel, Goodman’s concern is the shame the women feel for something that is not their fault.  She expands these horizons, making the book specific (an element in every successful novel, to my mind, is specificity) by tying the shame element to her two main characters as well.

The book is told in alternating narratives.  One narrative comes from Joan, the reporter who breaks the story; the other comes from Melissa, the wife and ultimately widow (shades of Jeffrey Epstein) of the accused man, who has left his widow not only covered in shame, but more or less broke.

Joan, who returns to her apartment after a night of celebrating her big story, is attacked.  While a book deal gives her the financial means to move out of her sketchy apartment and into a much nicer building, one with excellent security, it also leaves her both afraid to leave her new place and unable to work on the book that’s garnered her a windfall.

I admit to some resistance to the storyline when I first cracked the book open, as I sometimes think using a news item that’s so of the moment will ultimately date a book, but this one was so compelling, and such a nuanced character study of the two women at the center of the story. And unfortunately, sexual assault is always with us, as is the male entitlement that is grist for Goodman’s mill.

Goodman also has a touch of the gothic to her storytelling.  The building where the two women end up, The Refuge, sits atop a cliff with deadly rocks below.  In the past it was the home of an infamous Magdalen laundry type operation, where the women who stayed were not in a refuge, but in more or less a prison. The ghosts of these long-gone women seem to haunt the place.

Joan also becomes involved with a mysterious elderly neighbor, Lillian, who tells Joan in fits and starts her story of being a young woman in the 40’s and the trauma and shame she endured.  Joan, who is good at drawing out a story from someone, gets more detail from Lillian than she bargained for, as well as helping Joan herself to realize how a traumatic event imprints on your brain.  She relives the night of her own assault again and again, and it’s what renders her almost unable to function.

The story is told in such a propulsive manner, illuminating the lives and thought processes of the two women as they inevitably draw closer to one another.  Goodman has layered her character study on top of an excellent thriller.  The gothic, atmospheric touches only serve to make the book more memorable and harder to forget after you turn the last page.  This is one of the reads of the year.