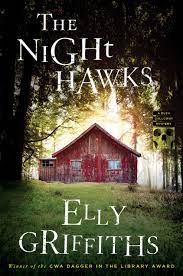 Elly Griffiths is playing to her strengths with this (seemingly) effortless, blast to read entry in her Ruth Galloway series.  Ruth is back home where she belongs, having broken it off with the unfortunate Frank, and she and Nelson are once again having fated and tense encounters.  Ruth is now head of the archaeology department at her university, discovering the paperwork and supervision headaches that come with being in charge.  She’s especially annoyed by the “new Ruth”, David, the know-it-all older lecturer she herself has hired.  He seems to be tagging along everywhere she goes and trying to tell her what to do.

As the book opens, the “Night Hawks” or metal detectorists, as they are called in England, are out on the beach at night looking for artifacts.  They discover what they think is a Bronze age hoard, but they also stumble across a body washed up on the shore.  Ruth is folded in when the Bronze age hoard is found to include a skeleton.   As Ruth heads over to take a look at it, David tags along.

Ruth gets to work setting up a dig and Nelson gets another call out in the middle of the night – shots fired at the ominous Black Dog Farm.  As the police move in they discover what looks to be a murder suicide inside, a husband having apparently shot his wife, then killing himself. The couple’s adult children, while shaken when given the news, also confess to hating their father. The man has left behind a note mentioning a body in the garden, and Nelson once again puts Ruth to work to see what she can find.

Griffiths also folds into her story the myth of the Black Shuck – a black dog that, if seen, indicates a coming death.  The black dog sightings and references permeate the book, adding to the gothic feel of the farmhouse and the creepy all-around atmosphere of any scene taking place there.

The two cases are, of course, linked, but it takes Nelson’s determined detective work to discover just how they are connected, and the work isn’t all his.  Griffiths always includes his team which at this point includes his second, Judy, who is married to series favorite Cathbad (he has much to say about the Black Shuck), and the overeager and ambitious Tanya.

Underlying all of this is the backdrop of Ruth’s life as a single mother, as a woman taking charge of her professional life, and the tension of having Nelson back in her and Kate’s lives, even at somewhat of a distance.  Ruth is a great, fully realized, relatable character.  She provides the grounding for this beautifully rendered series, beloved by so many readers, and a big reason for that reader love is Ruth herself.  She’s a great creation.

Griffiths has a satisfying and clever wind up to her story, but she also leaves the reader a bit of a cliffhanger at the end.  As always, I finished reading a Ruth book already looking forward to the next one.