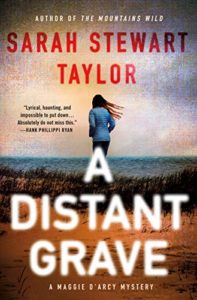 The second in Stewart Taylor’s Maggie D’Arcy series follows her elegiac first outing, The Mountains Wild, my favorite read of 2020.  Maggie is a Long Island homicide cop, but as the first novel explored, she has deep roots in Ireland.  In the first novel she searches for her long lost cousin’s killer; in the second novel, the crime occurs up the street from her home, but the roots of the story again take her back to Ireland.

She’s left behind a new-old flame in Ireland and has been planning a long vacation there with her daughter to visit him, but she catches a homicide case two days before they plan to leave.  When it turns out the victim was Irish, she figures she can combine business and pleasure, and her boss gives her leave to take off.

Stewart Taylor’s books are thoughtful slow burns, and they are also expertly plotted.  She very much reminds me of writers like Deborah Crombie and Peter Robinson, combining a police novel with a sense of place and a deep dive into character.  In this book her dive takes her into Maggie’s personal life as she struggles with the balance of raising a teenager as a single mother and hoping for some kind of a relationship in Ireland with her old flame. The problem is a knotty, complicated and adult one, and Maggie’s struggles will not be easily resolved.

It’s also a look at the life of the dead man, Gabriel Treacy, a high echelon aid worker who had, it turned out, spent time in troubled areas all over the world. As the threads of the story are unraveled, it becomes clear that Gabriel was held captive in Afghanistan and, while he was released, he bears the scars (literally) of being kidnapped.

In Ireland, Maggie is forced to split her time between work and time with her boyfriend (to his and her daughter’s dismay).  She’s drawn in further when the dead man’s lawyer is also discovered murdered in the Irish village where Gabriel grew up.  Some of the threads of the story tie back to the States, as Gabriel had died there and had been there to meet someone – the question is who.

Stewart Taylor manages to balance Maggie’s possible new life in Ireland with her work as a police detective, someone who is good at her job but who is also torn in the way any mother is between the pull of family and the pull of work.  The more Gabriel’s life is examined and discovered, the sadder the story becomes as it’s obvious he was a kind person who was only trying to do good in the world.

The characters in the book, from Maggie herself, to the dead man, to Maggie’s fellow cops, to Maggie’s daughter, uncle and boyfriend, are all incisively and vividly drawn, and as in all the best books, the characters determine the story.  The mystery elements exist because of the characters and the choices they’ve made in life.

The prose is lovely and as the plot begins to accelerate towards the end of the book, when all the plot threads come together, it really explodes – it’s hard to put down.  This is another spectacular read from an extremely gifted writer.