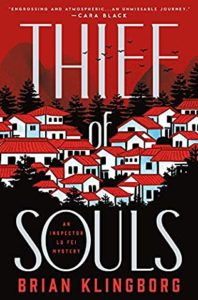 This is a really solid start to a new series, one that reminded me of Stuart Kaminsky’s classic Inspector Rostnikov series.  This new series is set in China, rather than Russia, but many of the societal and economic restrictions are similar.  Klingborg’s Inspector Lu Fei is as bemused and practical a thinker as Rostnikov.  Lu Fei lives near Harbin, in northern China, but not in Harbin itself – he basically lives out in the sticks.  He prefers the steadiness of country policing and doesn’t have a huge desire to move up the ranks.

Each chapter is bracketed by quotes from Mao Zedong, framing the basics of the way Communist China has been set up, and the reasons behind it.  Of course Mao is gone, but some of the precepts and tenants seem embedded in the culture.  As the book opens, a young woman has been discovered dead by the neighbors.  They had been alerted by the non-stop barking of her dog.

As the Inspector arrives at the scene with his team – his second is Sgt. Bing, and then there’s “Fatty Wang” and “Big Wang” as well as an efficient female officer, Sun, and the skinny, quiet “Li the Mute.”  There is probably plenty moving forward that Klingborg can do with all of these characters – in this first novel, they aren’t that fleshed out, but they do set the scene for the investigation nicely.

As Lu examines the scene and it appears they’ll need more forensics help than their back water can provide, they send for the experts.  (I think in the US it’s probably the equivalent of calling in the FBI.)  The experts quickly discover the woman’s body has been cut open, and on further examination, that several of her organs have been removed.

Lu works with the higher up officer, Song, to investigate the case.  While they arrest a neighbor for the murder fairly quickly, Lu is sure that he’s not guilty.  While Song disagrees, Lu keeps doggedly working the case to prove the man’s innocence, and eventually finds two other very similar deaths to the one they are investigating.

Klingborg’s real strength here is in portraying Chinese culture and life as it’s lived by ordinary people.  Lu’s small town life is enlivened by visits to a local dive bar – snacks are served but people are there to drink and admire the young widow who owns it, including Lu.  A portrait of his life – work, drinking, investigation, is incised on the reader’s mind as though you’re living it yourself.  To a western eye, it might seem a spare life, but Inpector Lu seems both satisfied and to expect nothing more – except to marry for love at some point.

The investigations both in the City of Harbin (where the dead girl had worked and kept an apartment before her mother became ill) illuminates different aspects of Chinese society and attitudes.  A gay bar.  A man who is a politically radical outlier.  The families of the dead women.  None of this is provided to the reader as a kind of tourist-y look at China – it’s organic.  Events and characters fold into one another naturally as the investigation unfolds.

I love the character of Inspector Lu.  I think he is both sturdy enough and interesting enough to provide a strong backbone for a long series.  I liked the story, the character interaction, and even some of the parts of the story where Inspector Lu gets into a few fights.  He’s trained in the martial arts and he mostly gets the better of larger opponents (and it sets the reader’s expectations, leaving Klingborg room for surprises).  The author writes these kind of scenes well, not an easy feat to pull off.

While the eventual murderer in an interesting yet inevitable choice, I didn’t care for the end of the book as it devolved into a more routine serial killer wrap up.  While I was delighted when the killer was caught, I felt it almost violated the tone of the rest of this well written, thoughtful book.  And it certainly wouldn’t prevent me from reading other books in this series.  As I said, I loved Inspector Lu, and would be delighted to spend more time with him.