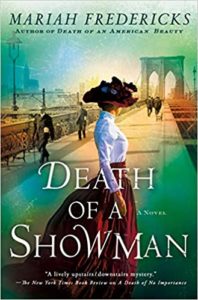 I love this vibrant, lively, insanely readable series, a series that takes unexpected turns with its characters but still hews to the traditional norms of historical mystery fiction.  The first book in the series, A Death of No Importance, was a fabulous origin story, where ladies’ maid Jane Prescott takes on the nouveau riche Benchley family in the first decade of the twentieth century.  The books are set in New York City and the Benchley girls are viewed as rich upstarts, and Jane’s special charge, Louise, is shy and gauche and seems to fit in nowhere.

Louise finds her prince, however, an equally shy but old money member of New York society, William Tyler.  This is the fourth book in the series, and Louise and William have returned from an extended trip to Europe when they are visited by an old friend of Jane’s – Leo Hirschfield.  He’s putting on a Broadway show and wants backers.  Louise is drawn like a moth to a flame and William insists that Jane accompany her to the theater, as a chaperone amongst the wild denizens of backstage Broadway.

Louise’s infatuation with the theater proves to be a bit of a divide for the devoted couple. Jane is uncomfortable as Leo, whom she had become very fond of in the last book (Death of an American Beauty), turns out to be married to a voluptuous chorus girl, who of course has a part in the show. Jane is quickly put to work backstage (as a bonus avoiding Leo), and she gets to know not only the ins and outs of running a show, but the ins and outs of the various jealousies and tensions that are coursing through the theater.

When the producer, an exceedingly unpleasant man named Sidney Warburton, is murdered when the company is out as a sumptuous dinner one evening, the show starts to fall apart as tensions are laid bare. The suspect pool appears to contain many members of the company, including Leo.

Jane’s smarts as a detective and as a human being are paired with a gift for observation and an ability to discern motives and connections in the people around her.  This book to me was one of the more traditional so far in Frederick’s strong series, but it’s set apart by several things.  One is the relationship between Jane and Leo.  As readers, we know the relationship continues into old age, but it’s not clear exactly how that happens.   It’s a central mystery of the series and Fredericks is very skillfully drawing this thread through the books.

One of the other things that sets the books apart is the look it takes at women’s lives.  There’s no judgment, no anachronisms, but Fredericks finds as much interest in Jane’s place as a lady’s maid as she does in Mrs. Tyler unexpectedly finding an interest for herself – the theater.  She looks backstage at the actors, the costumer, and the quiet woman who functions as the stage manager.  There are all kinds of choices in this life, Fredericks seems to be saying, and none of them should be dismissed or disregarded.

Ultimately, the solution to the murder lies in character, and the traits Jane uncovers as she questions folks backstage could only have been discovered by her, with her combination of intelligence and access.  The solution is satisfying. Then, like any narrative genius, one who leaves her readers wanting more, Fredericks ends the book with the outbreak of WWI and another question in the air about Leo and Jane’s relationship.  Greedily, I am already ready for book five.