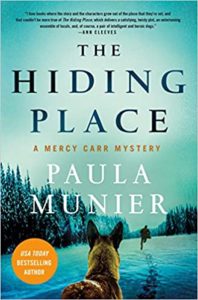 This is a favorite new series.  The books feature Mercy Carr and her military dog, Elvis, who have come home to Vermont to nurse their wounds (and their PTSD) after losing the love of both their lives, Martinez, in Afghanistan.  Both have reacclimated to a degree, though Mercy has a hard time with trust and tends to hold herself back when it comes to relationships.  While Mercy is slightly on the outs with her perhaps boyfriend, game warden Troy, her life is a full one.  She’s taken in a teenage mother, her baby, and her boyfriend; she has a tight relationship with her grandmother, Patience, a vet; and she and Elvis are now working as a complete team.

Into every life a little rain must fall, however, and someone turns up claiming that Elvis is his, and that Martinez had only had him on loan.  He wants him back.  This is a shadow throughout the book as the man tells her Elvis’ life with her is too dangerous.  He has a point – in every book so far, Elvis faces a near death situation.  It’s troubling Mercy, but she’s quickly drawn into an investigation when a pipe bomb explodes on her grandmother’s doorstep, sending both women to the hospital.

In the course of her investigation (she’s being monitored by Troy on instructions from his boss), she discovers a body.  It’s added to the recently discovered body of a scientist who had been studying moose.  There’s also an old mystery to be solved, perhaps tying into the new one, of a long missing woman.  These threads are seamlessly integrated, and the book has a wonderful storytelling rhythm.

There are several things that set these books apart. While it was more of a feature in the first book, Mercy is a huge fan of Shakespeare, and there are a generous number of quotes scattered through the books, mostly advancing the plot.  The setting is a character – Vermont in all it’s glory and nature in all its brutality as well as its beauty is beautifully defined and described.  And Elvis, the dog, is a nicely nuanced character but he’s still very much a dog. He’s not anthropomorphized.  His skillset (he alerts to dead bodies, guns and bombs) often comes in useful.

These are action packed novels, and Mercy takes a beating as much as V.I. Warshawski ever did, refusing to let herself heal, instead hurling herself back into action at every opportunity.  As in V.I.’s case, this involves a giant amount of stubbornness, but also a giant amount of smarts.  Mercy is an excellent detective even though she’s not really on the police force in any way.  She’s simply a retired military officer who seems to be discovered by local crime.  I’m thinking that thread may need to be resolved to a degree in future novels.

This is a compelling, well written story, and the characters of both Mercy and Elvis are quickly developing into classics.  I haven’t cried so much at the end of a book in a long time.  I was pretty sure what was going to happen, but I cried anyway, which is a great endorsement (in my opinion).  An author who can make you invested enough in a character to sob about her situation is a talented one.  This is a wonderful new series.