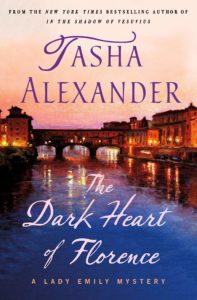 Tasha Alexander writes one of the most reliably entertaining series in mystery fiction – every book has a complex plot, often a dual timeline, a bit of romance, plus the reader gets to go on some armchair travel and learn a bit of history to boot.  In this latest Lady Emily outing, her dishy husband, Colin, takes her to Florence, along with her friend Cecile, for cover, as he works on something so secret for the Crown that he can’t even tell Emily.

It’s 1903 and they’re staying at Colin’s newly discovered daughter, Kat’s, home in Florence, and merely reading the descriptions of Florence will make you long not just for armchair travel but for the real thing.  Emily and Cecile are folded into Colin’s work by a circumstance beyond his control – when they arrive at the villa, one of the workers plunges to his death from the top of the villa and is discovered by one of the maids.  Emily and Cecile think they can do better winkling out what really happened to him, and of course, they are correct.

Colin and his fellow spy, for want of a better word, are off investigating for much of the narrative, leaving the focus, in this novel, on Emily and Cecile.  As they investigate in their own way – talking to shopkeepers, neighbors, and the fiancée of the dead man, they do begin to unearth some clues.  There’s also, they are sure, a treasure hidden somewhere in the villa, and one of the clues is the ancient graffiti left on the walls. Emily makes a meticulous catalogue of their locations and begins to translate the Latin phrases she finds.

I love the combination of scholarship and investigation in these books.  They are always excellent mysteries, but Alexander’s special twist is Emily’s love of the Classical world, which she draws into her narratives whenever possible. In this book, her interest is sparked by the spectacular Italian renaissance artists who populated Florence in the 15th century, and Savonarola, the man who came along in the late 15th century and tried to burn it all down. (This is where the expression “Bonfire of the Vanities” comes from).

To illustrate the rich culture of Florence in that time period, Alexander also treats the reader to the story of Mina Portinari, whose narrative begins when she is 16, in 1480.  We see her through a doomed romance, heartbreak, and a comfortable marriage, with only her passion for learning and scholarship remaining a constant. Mina’s grandfather introduces her to her love of ideas and as a girl she spends time with Botticelli and Lorenzo di Medici.

As the story progresses and the ravages of Savonarola’s destructive thugs cut closer and closer to home, Mina is both engulfed in events and takes steps to change the outcome.  Mina’s steps in the past find an echo in Emily’s investigations in 1903.  As always, Alexander draws her two threads together in a thoughtful and memorable way, leaving the reader, as always, eager for the next adventure.