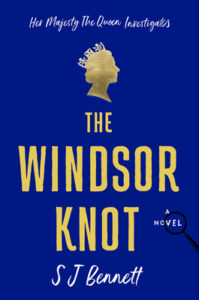 This book is adorable in the best possible way.  I usually hate it when real people are used as the detective, and in the case of this novel “the detective” is one of the most famous people on the planet, Queen Elizabeth II.  But SJ Bennett has real affection and reverence – in the nicest way – for her majesty and the actual detecting is mostly done by the Queen’s Assistant Private Secretary, Rozie Oshodi, a British Nigerian who shares the Queen’s affection for horses and would do anything for the “boss.”

As imagined by Bennett, the Queen in this novel is an intelligent politician who “has a gift for happiness” as her private secretary says toward the end of the novel.  She notices everything and because she is more or less the ultimate insider it actually makes her the ultimate outsider – she’s treated with respect but not actual personal knowledge.  Combined with a talent for noticing details, these qualities make her a perfect detective.

The crime takes place at the Queen’s favorite residence, Windsor Castle.  One of her guests, at the castle for a “dine and sleep” is a young Russian pianist who is discovered dead in his wardrobe the morning after.  The royal PR department goes into overdrive and the death is put out to the public as a heart attack, but palace security and MI6 are certain it’s the work of Vladimir Putin, and they set up shop in the Castle interviewing (and embarrassing) the staff to the Queen’s dismay.  The Queen has different ideas, and she presses Rozie to be her investigator, getting to places and people she can’t get to without creating a furor.

She and Rozie turn out to work well together and the mystery part of the story is actually slightly gritty, involving spies, drugs and illicit sex, and it’s also quite well thought out, clever and well paced.  The overall tone is far from gritty, however, but that aspect of the story adds some reality to the whole proceeding.

The tone of the novel in general is light and gently humorous, with a great back stage look as the royal apparatus prepares to celebrate the Queen’s 90th birthday (it’s set in 2016, when Obama was still President, and he makes a brief appearance).   I enjoyed Rozie’s capability and intelligence and her true bonding moment with the Queen – they take a ride together one afternoon, Rozie acquitting herself admirably as far as the Queen is concerned.

SJ Bennett may or may not have the details right or the Queen’s personality right but they certainly seem right.  She tells her story with real affection and admiration for the dutiful woman who has served her country since 1953.  In all that time, I’m certain she has become an able politician.  There was nothing in this book that felt off – it all felt so, so right.  It’s the most fun I’ve had “between the covers” all year, and if there is a more enjoyable book written this year, I would be very much surprised.  I cannot wait for the Queen and Rozie’s next adventure.