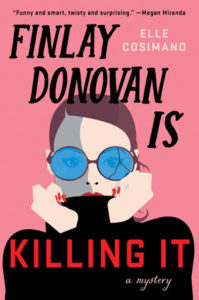 This book, which opens amidst the morning chaos of a mother with two children, one of whom has just cut off part of her hair right before school, breezily catches the feel of young motherhood.  It’s exasperating, exhausting, and nerve wracking. Finlay drops the kids off at school as she heads to meet her book agent and deliver the bad news that the book she’s supposed to turn in is nowhere near finished.

On top of all this, Finlay’s husband has left her for the cute realtor, his sod business is going full blast, and she has a mountain of bills to pay with no means to do so.  Also, to spite her, her ex has let the baby sitter go.  Things go poorly with her agent where they’ve met for coffee, but a woman nearby, over hearing – and misinterpreting – their conversation (Finlay writes thrillers) leaves a mystery note on Finlay’s table.  The sum of $50,000 is mentioned and there’s a phone number.

Finlay is curious and she gives the woman a call: it turns out she wants Finlay to kill her husband in return for the $50,000.   This is a plot heavy book and the set up is clever and meticulous.  Finlay actually considers killing the man, and begins to research him online, wondering just how bad a husband he could be.  The wife appears to do nothing but work and volunteer at a pet shelter.

So, that night, she dumps her kids with her sister (a cop, of all things) and goes to the bar where the man hangs out to scope him out, wearing the wig she uses as a disguise when she’s in her author persona.  She tells her sister she’s doing “research”. Through a twisted series of events, she actually ends up with the man passed out in the back of her mom van.  Not sure what to do next, she takes him home.

The turn of events from here on in takes a leap of faith on the part of the reader.  The man does end up dead – and it seems like Finlay is responsible, but her next decision, to get the babysitter (who turns up to collect her things while Finlay is in the garage) to help her bury him on her husband’s sod farm seems like a terrible idea.

Cosimano is an extremely accomplished and smooth storyteller and she puts the story across, forcing – yes, forcing – you to keep reading to find out what happens next.  Her roots are in young adult fiction and it shows in the narrative style (i.e., very, very readable).  Finlay is also an incredibly appealing character with relatable problems that most people have experienced.  The problem of being assumed to be a hit woman is just the extra bit that makes this a novel.

When another woman offers Finlay and the babysitter (they are now a team) $75,000 to kill her husband, Finlay feels things have gone too far, but the babysitter takes the money.  Desperate, Finlay takes the time while her kids are away for the weekend to turn the whole thing into her new book, which she then sends to her agent, who loves it.

The rest of the story is a caperish dark comedy with lots of threads and clues (read carefully) and my initial worry that I was reading about, and bonding with, a murderer, was assuaged.  It all seems like it could have happened, which, considering the fantastic story being told, is a real achievement on the part of the author.  It was just the read a I needed on a grey January day.  If you want a laugh as well as a change of pace, give this one a try.