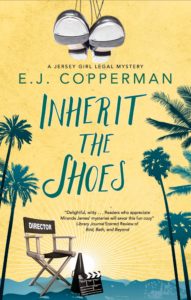 This is a delicious, funny, perfect book.  Copperman, a seasoned series veteran (Haunted Guest House, Asberger’s, Mysterious Detective, Agent to the Paws, and, as Jeff Cohen, Aaron Tucker and Double Feature) brings all his writing expertise to the table in Inherit the Shoes.  Lawyer Sandy Moss has just moved to California from New Jersey to start over.  On her first day at her new law firm she’s told to sit still and be quiet (she’s new to defense, she’s come from the prosecutor’s side of the table), and, instead of being quiet, she speaks up.

Her firm is negotiating the divorce of a well known TV star and his wife, a singer whose star has fallen.  Their separation is acrimonious and much of it seems to center on “Jimmy’s Shoes.”  When Sandy steps up with a kind of common sense remark toward the end of the proceedings, her new boss is furious, but the client, Patrick McNabb, says she has passion and wants her as his attorney.  When he’s arrested shortly after for murdering his soon to be ex – with a bow and arrow no less – Sandy gets a crash course on running a murder case with only the help of an aspiring law student who seems to want to put the moves on her.

This kind of caper mystery needs a light but steady hand.  Writers like Donald E. Westlake, Lawrence Block (in his burglar incarnation), and more recently, Catriona McPherson, are all similarly gifted.  Copperman has such a sure hand, such a comfortable and believable writing voice, and such a wry sense of humor that his books are a pure pleasure to read.

The story of Sandy’s hurried lesson in defending a client who ignores what she tells him and who charms most he comes into contact with, is hard to put down.  When the attempts on Patrick’s life and the threats to Sandy herself accelerate the story takes on a real urgency.  Laid on top of the humor that permeates every page, this is a knock out combination.

It’s also full of Copperman/Cohen’s love of the movies.  The “Jimmy’s shoes” the pair were fighting over belonged to Jimmy Cagney – he wore them in Yankee Doodle Dandy.  While Sandy pooh poohs the value of this kind of item, there are of course many collectors and plenty of movie lovers who would beg to differ.  But her matter of factness is a nice contrast to Patrick’s over the top passion.

Sandy is the kind of character you root for from page one forward.  It’s fun to see how she figures things out (she was way ahead of me) and fun to see how this fictional trial unfolds.  Her new to California status is also entertaining.  This story was witty and clever, with twists and turns coming just at the right beat of the story’s progress.  I haven’t enjoyed a book more in quite awhile, and I can’t recommend it more highly.