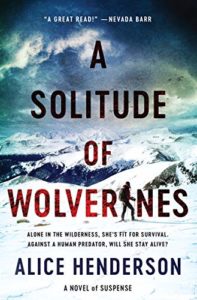 Proving her hand with action scenes, the book opens with Alex attending an event celebrating the saving of a natural habitat within a city.  Her discovery of over a hundred species of birds who called the area home has prompted the city of Boston to create a protected space, upsetting plans for a development project.  Alex is due to be interviewed by a TV reporter – during the interview the two women are shot at and while Alex escapes, she is traumatized by the incident.

As it happens, Alex gets a call that very night asking if she’s willing to go to Montana to study wolverines.  She has recently separated from her boyfriend and hates the city – she snaps up the opportunity and heads to Montana the next morning.  She’s to live in an abandoned ski lodge and work the land trust that it sits on to see if wolverines are present.

The tension in this novel, and I imagine in any future novels, comes from the hostility some feel for things like land trusts that prevent development or, as is common in Montana, cattle grazing.  The residents of tiny Bitterroot seem generally hostile and suspicious, and the only place Alex feels safe is out in the woods.

A real strength of this book, aside from the character of Alex, is the specific details of how animals in the wild are tracked.  Alex uses something called a hair trap and a remote camera to capture, hopefully, evidence of wolverines.  The whole set up of the trap and her encounters with wolverines in the wild are pure magic.

Henderson throws in a great deal of suspense and the element of Alex not being able to really trust anyone in town makes her solitary nature, ability to tinker with motors and all things mechanical, as well as her mother’s teaching her from a young age how to survive in a wilderness situation, a rich protagonist.

At one point her ex, now a corporate lawyer, turns up to try and convince her to come back to Boston with him.  The tension between the two of them is a mirror of the greater tension in Alex’s universe – that of nature preservation versus development.   When he leaves – I don’t think this is a spoiler as they are so obviously unsuited – Alex really feels free.

I thought this was a wonderful, suspenseful novel with a fantastic main character and a fascinating background of endangered species preservation.  I also thought it had some first mystery pitfalls – it’s a little too stuffed with elements.  The cadence of the narrative isn’t as smooth as I imagine it will be in future books.  However, this is a really outstanding series kickoff, a great read, and a classic character in the making.