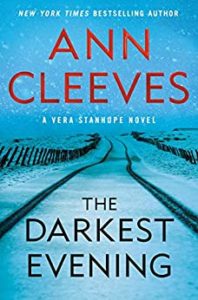 This book will be published on September 8.  You can pre-order it here.

Along with Deborah Crombie, Peter Robinson, and Louise Penny, Ann Cleeves is one of the very best writers of traditional detective fiction at work at the moment.  With now three strong series to her credit, one of the most delightful features the cranky Vera Stanhope, whose hopelessly messy and unstylish appearance conceals a sharp and perceptive mind.  She’s Columbo in the British countryside, just a shade less congenial.  This installment finds Vera face to face with the fancier branch of her family, impoverished landholders who can’t keep up the stately family home.

Cleeves, like her contemporaries, uses the very traditional format of the British country house mystery but stands it on its ear, taking in today’s issues.  Vera recalls to herself at one point the words of her family black sheep father, Hector, when she joined the police: “It won’t be like Agatha Christie, you know.  It won’t be all country houses, vicars, butlers and wills.”  She then goes on to consider that the vicar is a woman, the butler an educated female housekeeper, but there is a country house and a missing will.

As the book opens Vera is driving through a terrible snowstorm and she comes across an abandoned car – with a baby in it.  She leaves a note, takes the baby, and heads to her ancestral home where she interrupts a Christmas party and is treated like the help by her distant cousins.  They take her and the baby in, though, as Vera, stuck for the duration of the storm, settles in to sort out the baby.

Two girls who had been helping out at the party wait for their Dad to pick them up on his tractor during the storm, but he breaks into the kitchen and says he’s found a body in the snow.  It turns out, of course, to be the baby’s mother.

And here is where the golden age mystery differs from the contemporary one.  Yes, the set up is traditional – Christmas house party – but the after effects and psychological impact of the crime are as important as the crime itself, and it’s character development and the unpeeling of those characters by the canny Vera that lead to the ultimate solution.

Vera is surrounded by a strong team, and the two officers who work with her most closely, Joe and Holly, are fond of her despite her quirks.  They balance each other out in a really good way, each one having different strengths that play off each other.

There’s also a theme of strong women – and Cleeves lovingly illuminates the various women in the community and highlights their strengths, including the dead girl’s.  She’d been through – and survived – quite a lot, making her death even more heartbreakingly poignant.

Cleeves frames the novel with one of my favorite poems (one my aunt, also my third grade English teacher, made us memorize) – Robert Frost’s evocative classic, Stopping by Woods on a Snowy Evening. While the book is atmospheric on its own, the Frost poem adds that extra sparkle and depth to the read that makes the book even more memorable.  To me, this is one of the reads of the year.