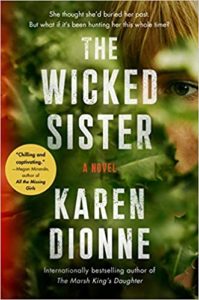 Set in Michigan’s beautiful upper peninsula, the book alternates narratives between that of Rachel’s, in the present, and that of Jenny’s and Peter’s in the past.  It’s not immediately clear how the two connect but when they do, you really can’t look away.   Rachel is living in a mental hospital for killing her mother at age 11 and watching as her father then killed himself.  She has no memory of these events.

Jenny is living downstate with her husband when the disturbing death of their neighbor’s toddler in their pool causes them to leave town and flee to the upper peninsula, where Peter’s family has an incredible log cabin outside of Marquette on acres of land.  The two have decided to pursue their research there as wildlife biologists, and give their young daughter, Diana, freedom to roam the woods.

But it becomes clear that Diana isn’t normal, and that she may or may not have been responsible for the death of their neighbor’s son in their pool.  She’s certainly difficult, defiant and seems to have little emotion regarding others.  Her diagnosis, to any mystery reader, is pretty obvious, but Dionne slowly and carefully builds her character, making her defining qualities – and her cruelty – all the more chilling.

She also builds the character of Rachel, who of course is Diana’s younger sister.  She’s the sweet angel to Diana’s difficult malignancy, and her parents spend most of their time managing the two girls so they are never alone together.  To that end, Jenny’s sister Charlotte comes to live with them to help supervise Diana.

This is a remarkably similar formula to William March’s 1954 novel The Bad Seed, and it’s no less a compelling topic in 2020 than it was in 1954.  What’s far more contemporary is Dionne’s look at the effect that Diana has on their family and the fissures in their relationships, fissures that they are all but unaware of as they attempt to learn to live with someone who is profoundly disturbed.

As the novel opens Rachel is in a mental hospital, but she checks herself out and heads back to her family’s cabin, hoping to restore her memory.  Her arrival back at the house ramps up the suspense of the novel, as her memories start to return in bits and pieces.

Dionne is a fan of fairy tales and a bit of magical realism.  Rachel is able to communicate with animals – it’s up to you whether you believe she can or not, but if you have even been around someone who is so comfortable with animals that they do seem to be able to almost speak to one another, you might tilt toward belief.  She’s also a lover of the upper peninsula, in all it’s brutal glory.  Both of these elements make this novel more than a run of the mill suspense novel, as does her real genius with character.  None of the characters in this book are forgettable, and each of them seem almost hyper real.  This is not an easy book to forget.