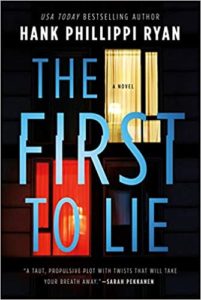 Hank Phillippi Ryan was on the cutting edge of the new wave of what I think of as “fem jep” with a psychological edge.  Other writers like Gillian Flynn and Sophie Hannah were also early, excellent adopters of this formula.  I read many of these books – they’re a blast – but I got to thinking recently, what sets one apart from another?  Almost all of them have an insanely clever hook, and Ryan is no exception to this particular trope.

But what really, really draws me into Hank Ryan’s books is her pure empathy for her characters.  Maybe it’s her years of working as a reporter, listening and taking in other people’s stories, but however she comes by this quality in her writing, it’s an extraordinary one, and one that’s often missing from similar fem jep thrillers.  It makes you completely invested in her characters and to me, also amps up the suspense, because if you truly care about the people you are reading about, bad things happening to them are that much worse.

In this novel, Ryan introduces several characters, alternating narrators, but the basic story revolves around Ellie and Meg, two investigative reporters for a new station in Boston, and Nora, who for reasons of her own is working undercover at a pharmaceutical company.  All three women are focused on a drug that’s supposed to dramatically increase the possibility of pregnancy with the big downside of sometimes causing complete sterility.

All of them are unsure of one another, and Ellie and Meg are neighbors, with the chirpy, enthusiastic Meg putting Ellie on edge.  Ellie is the most in the know of all the characters – or is she?  This book is a complex puzzle where each piece, i.e. character, intersects with the other characters but the connections aren’t entirely clear until the whip smart end of the novel.

Another strength of Ryan’s as a writer is that she doesn’t “just” write thrillers, she writers mystery thrillers.  The mystery elements of her books are as strong as the thriller elements.  These aren’t just ticking clock stories; they have an emotional resonance to them as well as a puzzle element that keeps you turning pages as fast as you can.

As the book progresses, it’s almost as though Ryan brings her story and characters into tighter and tighter focus.  The ultimate denouement is both surprising and so well laid out you could almost kick yourself for not having seen it coming all along.  Because the crisp writing and plotting combine with memorable, sometimes heartbreaking, characters, these are books you don’t quickly forget after you stop reading them.  The lesson for this book seems to be: take nothing, and no one, at face value – or for granted.