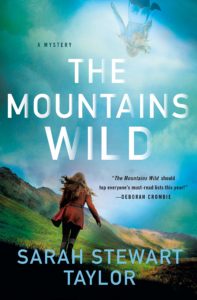 It’s not a total departure from the Sweeney books – the passion is there, the love of history is there, but it’s more focused.  It follows the story of Maggie D’Arcy, who, as an adult, is a homicide detective on Long Island, but who, as a 20 something, lost the cousin who was like a sister to her.  The cousin, Erin, had left the states for Ireland, and hasn’t been heard from since 1993.  There are other young women who were killed (and discovered) in the same area, and Maggie and the rest of her family are pretty sure Erin is dead, but they’d like to know.

As the book opens, Maggie gets a call from her uncle (Erin’s father) in the middle of the night, telling her an Irish Garda had called requesting a call back.  Maggie is the one to call and it turns out they’ve found something else of Erin’s – that’s all that’s needed for Maggie to get on a plane and head to Ireland to find out as much as she can.  She leaves her teenage daughter, Lilly, behind in the care of her ex with a plea for them to check up on her uncle.

The book alternates timelines, mostly between the time of Erin’s disappearance and Maggie’s first search for her, with the present and her search for Erin with the new discoveries, but it also backtracks in time to the girls’ childhood together. It also turns out that another young woman is missing, and the clock is ticking.  Stewart Taylor very effectively alternates between the solid police work Maggie is capable of in the present, to her previous, unformed 20 year old self, grieving for her mother, puzzled and saddened by her cousin’s disappearance.

There’s a lovely quote toward the middle of the novel: Overcome with a sense of timelessness, I feel suddenly that these twenty-three years are both in me and not in me, that I am twenty-two and forty-five, all at the same time, a mother and not a mother.  I close my eyes and let the wind rush all around me.  That encapsulates Maggie’s mental journey in a lovely, spiritual way.

But the reader can see the journey.  We meet the young woman, unsure of herself, of love, of her feelings, trying to find a path forward.  Then we meet the 40 something woman, the competent professional, the one who nevertheless has a personal stake in the proceedings.  The realization that life is complicated and messy come to most of us as we hit middle age, and Maggie is no different.

This is not only a wonderful mystery, it’s a pretty excellent police procedural – even if Maggie is mostly at a remove from the proceedings – and it’s a truly lovely character study of Maggie and Erin.  As the book concludes, with more finely drawn versions of both women, the result is both stunning and revelatory.  I truly hope it’s not another long 14 years before we hear from this talented author again.