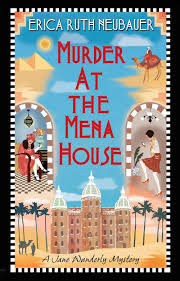 Erica Ruth Neubauer’s debut novel is lots of fun, much in the vein of Kerry Greenwood’s delightful Phryne Fisher books. It’s 1926 and Jane Wunderly is on vacation with her slightly prickly Aunt Millie, from her dead husband’s side of the family.  Aunt Millie has selected the exclusive Mena House in Cairo for their trip, a place nearly at the foot of the Great Pyramids. (It’s also the spot where Agatha Christie wrote Death on the Nile).

While this novel is steeped in all things Egyptian – camel races, pyramids, the sphinx, stolen and found artifacts, along with a visit to the museum – it is not about an archeologist or archaeology.   I thought this was an interesting choice given the time and place, but a sensible one.  It allowed Neubauer to tell a full on traditional golden age style detective story.

All the golden age suspects are present.  There’s a colonel, an obnoxious flapper, a mysterious and handsome stranger, the aforementioned aunt, the athletic ingenue and her tag along friend, and a honeymooning couple who are charming but seem to operate slightly outside the strict definition of “legal.”  It’s a fun mixture, and the two deaths tossed in don’t really dim the fun of the story – another truly golden age element.

What’s not quite so golden age is Jane Wunderly’s backstory – her dead husband was abusive and cruel, and Aunt Millie seems aware only of his lost charm.   Jane lost him in the war and doesn’t regret it for a moment.  But the psychological depth this gives Jane is more modern than golden age, and it’s a nice mix.  Neither is too heavy handed.

This story also has some strong adventure elements – there’s a debt here not just to Phryne Fisher and Lauren Willig’s Pink Carnation books but even to the inimitable Mrs. Pollifax.  While a golden age detective like Marple or Poirot would use mostly their brains alone to solve a crime, Jane is in the thick of the action, uncovering clues and getting herself into trouble.  It adds buoyancy to the story.

The resolution is properly romantic (I did mention a handsome stranger), and Jane also finds herself far more capable than she had supposed though she often needs to take a step out of the action to think and re-group.  Jane is an appealing central character who obviously is on the verge of a journey of self discovery.  I also loved the setting and the hotel itself, shared with the reader in lavish detail.  In this time of quarantine, it’s great to have a chance to take a little armchair jaunt back to 1926.