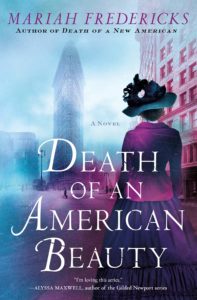 I remember when Rhys Bowen started writing her Molly Murphy series.  I inhaled them the second they were published.  I loved (and still do) the mix of the feisty Molly, her journey of discovery as a new immigrant, the clever mysteries, and the turn of the century settings.  Rhys Bowen has the gift of narrative.  I am so happy to tell you – because I want to make you a fellow fan – that Mariah Fredericks has that very same gift.

I have so far inhaled all three of her books featuring ladies’ maid Jane Prescott, who works for the wealthy Mrs. Louise Tyler around the 1910’s.  She has a way with a story, and a way of getting you to care about and be invested in her characters.  In this novel Jane is on “vacation”, so she goes home.  Home for Jane is a refuge for fallen women, run by her uncle, a Presbyterian pastor.  He takes women who come from the streets and gives them a place to live, something to eat, and a little hope for the future and a different way of earning a living.

As the women are setting up for the all-female ball they have every year and her uncle prepares to leave for the evening, talk turns to one of the girls, a stubborn one who had fled the boyfriend who attacked her but who still misses him.  She is sneaking out and the women fear for her safety – with good reason.  She is found dead the night of the ball.

Unfortunately, Jane’s uncle is suspected of the crime and pilloried in the press, sending Jane off on a mission to discover the real killer.  The mission involves finding an old resident of the home that gives the reader a look inside the lives of these desperate women.

Jane also is called back into service.  Her employer, the shy Mrs. Tyler (readers will have come to love her in the other novels), has been pressed into portraying Abraham Lincoln in a pageant at one of the biggest department stores in the city.  They will also be crowning a new “Miss Rutherford” – Rutherford’s is the department store – and along with Louise, Mr. and Mrs. Rutherford are heavily involved in running the pageant from every angle.

While in other novels Fredericks has touched on social inequality, anarchy, immigration and the rights of women, in this novel, while she touches heartbreakingly on the way African Americans were/are treated, what she brings to full, breathing life is Rutherford’s Department Store.  These kinds of stores no longer exist but they live on in my memory.

Anyone who grew up in Chicago will have a memory of Marshall Field’s – and when I was a young woman, I worked at the great Dayton’s in Minneapolis.  These stores were practically cities – they had everything.  Field’s had a bakery, a fabric department, a bookstore – and many of them hosted events, much like the pageant described in the book.  When I worked at Dayton’s in the 80’s I was lucky enough to see in the store Lana Turner, Bette Midler, Gloria Vanderbilt and Paloma Picasso, just to name a few.

Rutherford’s is just the same kind of store, with floors filled with beautiful things, and the salesladies to get you into those things. Jane works her fingers to the bone altering costumes for the pageant performers, and also gets swept away for a night of dancing by a bold piano player. This book breathes life and excitement.  The story – which piles up a few bodies – is wrenching, and hard to look away from.  It’s surrounded by the world of 1913, and I truly felt transported.  Very unfortunately I finished this read in a day and now must wait another year for a visit with Jane Prescott.  I urge you to make her acquaintance if you haven’t already.