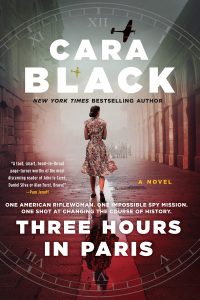 This ticking clock thriller feels like the book Cara Black has long wanted to write, it’s so explosive, so taut, and so impossible to stop reading.  The propulsive narrative follows Kate Rees, a young American sent to assassinate Hitler when he visits Paris for three hours in 1940.  The set up introduces Kate as she’s waiting with her sniper rifle for Hitler’s appearance; then it goes back in time, very briefly, to establish Kate as a person.  She’d been living in Scotland with her Welsh husband and their baby daughter when she loses them both to a German bomb, making her determined to fight the Germans with every bit of herself.

This look at Kate’s backstory is both narratively efficient and extremely effective as it causes the reader to care about Kate and be completely invested in her. Black then turns her sights to her real objective: telling an hour by hour story of the hunted and the hunter.  As it’s 1940 it’s not a spoiler to say Kate misses her target, though she does hit another one, and the Fuhrer wants the shooter found and dispatched.

This unhappy task falls to Gunter Hoffman, who is given 36 hours to find the shooter.  He reluctantly shoves the Steiff bear he’s bought for his daughter’s birthday back into his bag and begins his hunt.  The bear becomes almost a totem, and shows up in different ways through the very end of the novel.  It’s the kind of specific detail that helps the reader reluctantly understand the mind of a Nazi officer – to a degree.  When both sides of the equation are humanized, it makes the playing field far more interesting.

Some of Kate’s background detail establishes that she’s a crack shot (thus the sniper assignment), and it shows her being taught the subtle art of disguise.  This comes in extremely handy, as things obviously go south pretty quickly.  Kate is excellent at thinking on her feet and negotiates her way through a maze of drop sites and contact points, often using her anonymity as a woman to her advantage.

By turns she disguises herself as a mother pushing a baby buggy, a nurse, an old woman, and a cleaning lady – all types that tend to be overlooked.  While I felt this was deliberate after finishing the book and thinking about it for a while, while I was reading, it didn’t cross my mind.  It just seemed like another thing Kate had to do to stay alive and elude the Germans.

For a thriller to really work, the gears and inner workings of the plot shouldn’t be too apparent.  They should just naturally fold into one another in a progression that seems absolutely inevitable.  This was definitely the case with this novel.  I also approached it, I have to say, somewhat reluctantly, as I was wondering what possible new way could be found to tell the story of occupied (or about to be occupied) Paris.

But this book, as it turns out, was completely original.  Kate is a different type of character and she’s completely mission driven.  She thinks practically, fights like a man, and has the skillset of a hunter.  The plot never lets up.  The characters are made human to the reader, but the main thing is the hunt and the ability of the hunter to locate his prey.

Read it.  There were so many unexpected twists and clever acts of thought and action on Kate’s part I think I will be mulling it over for quite a while.  It’s a fabulous change of pace for the talented Cara Black.