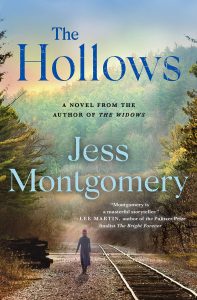 The second novel in Jess Montgomery’s remarkable series set in a 1920’s Ohio mining town is every bit as memorable and vivid as the first, The Widows, which was far and away one of the best books of 2019.  Montgomery brings to life the story of the first female sheriff, Lily Ross, in tiny Kinship, Ohio.  While the first novel concerned itself with the politics of mining, this novel is more of a straight mystery, which veers into the unfortunate territory of racism and because of the time period, an ever present and ingrained sexism. This is naturally a hindrance at times to Lily’s carrying out her duties.

The book opens with the wandering of an old woman down some railroad tracks, where she ultimately falls to her death.  As Lily is called in to investigate, she of course wonders if the frail, shoeless old woman fell, or was pushed.  One of the strengths of both novels are the network of kin (her town is even called “Kinship”)  and friends that Lily calls on and relies on to both help her get through the day taking care of her children – that’s often her mother, raising her own late on life child – to taking care of prisoners at the jail, to figuring out the deep connections in the backwoods hollows that to any outsider would be impenetrable.

Hildy, Lily’s friend since childhood, is the one Lily calls on to help with tasks at the jail.  Lily is somewhat dismissive of Hildy, thinking her soft and simply awaiting marriage to the staid Merle, owner of the town grocery store.  Then there’s Marvena, encountered in the first novel, union worker, still owner, and force of nature.  What Marvena doesn’t know about the backwoods isn’t worth talking about.  She’s also Lily’s source for tracking dogs, so the two of them set out to track the dead woman’s path.

The path takes them to the doors of the mental asylum, The Hollows of the title, where Lily discovers that the woman suffered from dementia.  She ultimately discovers family ties the woman had to the town.  Deep and terrible events bound the woman to Kinship, and as Lily peels back layers, exhausted and helped by Marvena, she also uncovers a women’s branch of the KKK, known as the WKKK.  This was sadly a real organization.

Montgomery does not shy from politics, and she includes the unfortunate history of this awful racist organization, as well as the work the Quakers did on the underground railroad.  As in all things, it’s a crazy balancing act, with extremes existing at the same time and in the same place, often with no common ground.

Montgomery also has a hand with prose.  Her writing is lovely, and she truly illuminates the Ohio valleys she’s describing, as much as she illuminates the inner lives of her characters.  This novel mainly belongs to Lily and Hildy, another illustration of a relationship out of balance throughout much of the novel.  Montgomery’s love for her characters, for the land she’s writing about, and for the time period she’s chosen, shines through on every page.

If she has a direct ancestress I would say it would be Sharyn McCrumb.  Sharyn McCrumb’s Appalachia is in a slightly different location, but McCrumb and Montgomery share a reverence for folk culture and even the possibility of an unexplained spirit or two.  My best advice: dive into these wonderful novels.  It’s an immersive and beautiful experience.