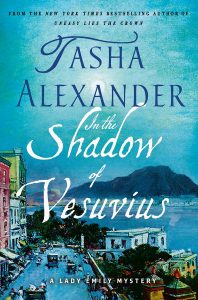 This novel is available January 7, 2020.  You can pre-order it on this website.

There’s always a moment in a Tasha Alexander book where I give a little yip of joy.  Be it a ghost ballerina or a lovingly described Worth dress (there’s a beauty in this book), in this outing, it was the body hidden in plain sight amongst all the others in Pompeii.  When a fresher corpse is noticed by Lady Emily and her husband as having the wrong sideburns and the discovery was made, I could not have been happier.

Corpses and Worth dresses aside, I think this was one of the more intellectual of Alexander’s novels.  The author, like her heroine, is a true lover of history, and Lady Emily’s preference is the ancient world.  Pompeii could not be a more perfect backdrop for her sleuthing.  The clues scattered through the novel make a reference to history and provide warnings Emily and Colin mostly choose to ignore.

Adding to the drama is the arrival of a certain Katherina Von Lange, who seems far too young…and who turns out, in fact, to be Colin’s daughter, turning up out of nowhere and making things awkward and tense for most of the characters in the novel.  Lady Emily, despite Kat’s attempts to ignore and belittle her, remains above the fray and attempts to support her husband as he suddenly morphs into an overanxious parent.

The mystery part of the story is an excellent traditional mystery of the sort Alexander is expert at creating.  She uses all the traditional tropes – red herrings, clues, closed suspect pool – to her great advantage as she spins a tale that takes Emily, Colin and Kat all over Pompeii.  As readers we get to learn a bit, but the history never overwhelms the story.  It’s instead integral to the story.

There’s also a parallel story set in Pompeii which if course, as readers, we know will end tragically.  It’s the story of slave girl Kassandra, a budding poet, who deceives her best friend (and mistress) by sharing her poetry with her best friend’s eventual husband.  The two meet in secret as Kassandra pens scroll after scroll of an epic poem, shared only with her friend’s deceptive husband.

Alexander has all the necessary tools in her mystery writer’s toolbox that make for an exceptional read.  She has a gorgeous and fascinating setting; she has characters that are beloved by readers but who are challenged in different ways in each novel, as they are in this one, by the arrival of Kat; and she tells a great story.  The highest complement I can give (almost) is that I didn’t figure out the ending.  I read so many mysteries I can’t help a mental round of applause when this is the case.  It’s a golden age skill, still kept vitally in play by the talented Alexander.