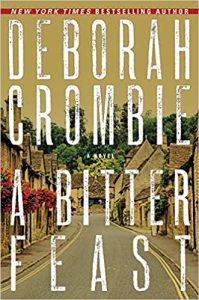 I don’t think there was a book I was more excited to read this year than this one and happily, I wasn’t disappointed.  It’s been three long years since the last novel, The Garden of Lamentations, and I have missed Crombie’s perceptive take on human nature.  It’s character that dominates her novels.  Characters are the alpha and omega of her writing, and this book is no exception to the rule.

I have to say I nearly swooned when I discovered the book was set in the Cotswolds.  There can be no more English village-y type setting, and contemporary writers from Erin Hart to Elizabeth George to G.M. Malliet have taken this classic setting and run with it.  There’s a depth to Deborah Crombie’s writing that sets her apart, and it percolates through every detail of her novels, from setting to plot to whatever she has chosen to examine in a particular book.

In this novel, its food (and to a lesser degree, gardens) but its food that dominates as well as the passion of Chef Viv Holland.  As Gemma and Duncan head out to their coworker Melody’s family mansion in the Cotswolds for a weekend with their children, they take separate cars due to complicated schedules.  Duncan, unfortunately, is involved in a crash on the way there and this also colors the novel’s events.

Duncan’s crash occurs because someone has crashed into him, and the occupants of the other car are dead at the scene.  The story revolves around this occurrence.  Because Duncan is not quite himself thanks to the accident, as well as operating as a guest in someone’s house not to mention as a guest of the local police department, his involvement in the crime is slightly removed, but his perceptions are almost sharper, as he’s observing from the outside.

Because this village – Lower Slaughter, an apt name for a village in a mystery novel, if ever there was one – is small and tightly bound together, everyone knows everyone else.  One of the dead passengers in the crash proves to be a famous chef, well known to Viv personally, and the encounter they had in the pub kitchen where Viv works shortly before his death  is heated and overheard by many.

It takes the rest of the novel to drill down to what it is that bound Viv and the famous chef to one another, why Viv’s eleven year old daughter is furious with her, and the relationships that exist between the various coworkers at the pub.

Melody’s lovely house and parents form the other arm of the book. Melody’s mother is involved as she is giving a charity luncheon where Viv is the chef.  Her father is a well-known newspaper publisher and she’s been shy about sharing the fact of who she is with her co-workers, though she’s brought three of them home with her for the weekend.

I wouldn’t call this a police procedural, though it is one. I’d call it more of a character procedural.  The characters, personalities, strengths and weaknesses of every person in the novel all play into the eventual outcome of the story.  Each reveal is an organic one, coming naturally from the one before.  This is a seamless, beautiful read, one of the best of the year.

And for the curious, you might look up the gardens of Gertrude Jekyll as well as The Slaughters Manor House.  Deborah Crombie’s research must be a real delight.