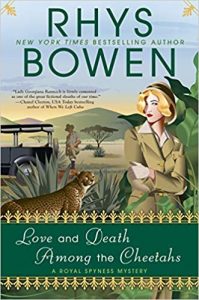 Every time I finish a Lady Georgie book by Rhys Bowen I think to myself, well, there’s no way she can write another book that’s so insanely enjoyable. But every time…she does write one that’s just as positively crazily enjoyable as the one before. She has the gift of narrative in spades, but she also has a light hand with it. Each time, she puts her characters in a fresh situation, and this is book 13 in a series. In the last book (Four Funerals and Maybe a Wedding) Georgie and Darcy were married at last. So what comes next? A honeymoon, naturally.

Georgie and Darcy start their married bliss on a canal boat but when they run out of caviar and start craving cucumber sandwiches, they feel it’s time to head for home. Upon arriving at her brother’s place, she and Darcy find they’ve been invited to the Queen’s garden party. At the party, two key things happen: Darcy blurts to the Queen that he and Georgie will be spending the remainder of their honeymoon in Africa, and the Queen takes Georgie aside and begs her to keep an eye on the Prince of Wales, who is on a Royal Tour of the continent. She fears…Mrs. Simpson.

As Georgie prepares for her African journey – at the time even an air journey took several days – she is equally nervous and excited. When she and Darcy board the final leg, not only is Mrs. Simpson present, but so is a much detested former school mate, Rowena, who is going with her brother to visit her little known father in Kenya.

Bowen always manages to combine Georgie’s pleasant naivete with her ability to rise to the occasion – be it a monkey on her bed in the middle of the night or a dead body at the side of the road. The book is steeped in African atmosphere – heat, animals, unfamiliar, if lovely, terrain. Even more unfamiliar is the decadent culture in what was known as “Happy Valley.” Georgie and Darcy are plunged into it when they are invited to a party at the home of the notorious “Bolter” (well known for leaving her husbands).

This is all magnified by the growing cloud of Hitler and the looming shadow of another war. Its 1935 but there’s already a network of Hitler loyalists, even in the remotest part of Africa. While this is a heavy and dark scenario, the book is neither. It skirts the line between frothy and serious in a perfect way.

Bowen is also incredibly finely tuned to class distinctions. There’s a scene where the policeman in charge of the inevitable murder investigation turns up to question a houseful of titled and entitled white nobilty and society types and the lines not crossed and discussed, but very present, are sharply drawn in the most concise of ways. She fleshes out her scenario with the kind of nobility possessed by the Masai and Kikuyu who wait upon the whites, nobility that is missed completely by their oblivious masters.

Bowen is also good at the mystery part of things, as I read to almost the end and wasn’t sure whodunnit until it was actually revealed via a flash of insight of Georgie’s. I enjoyed this novel so much, as Bowen is carrying on, more than almost any other contemporary mystery writer, the deliciousness of the golden age of detective fiction while updating and tweaking it with her attention to character. Oh, and there’s a little cliffhanger about the future of the Prince of Wales and Mrs. Simpson at the end. Need I say I am already looking forward to book 14 in this series?

Note: I recommend reading the author’s note and the historical note at the end, as well as the list of books she referred to as she put together this novel. This was a fascinating if particular and decadent time in British and African history and the reading she recommends is well worth a look.