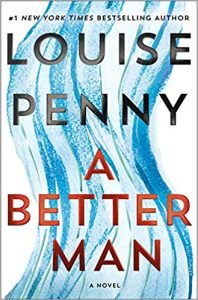 This is one of the more stripped down narratives Louise Penny has delivered.  Stripped down for Penny, that is.  The essential story is a simple one that drives her narrative, but being a complex writer and thinker, she’s made the simple complex.  There are two threads.  One concerns the disappearance of a woman who happens to be the goddaughter of a Surete officer.  Gamache, who has returned to work with a demotion (he’s head of homicide, not the entire Surete) accompanies the officer to the village where the woman lived.

It quickly becomes clear the missing woman was abused by her husband, and while she called her father saying she’d be home, has not turned up there.  There’s no evidence of her presence, living or otherwise, at her home and her husband, frequently drunk and obviously brutal, is not assisting the officers with their enquiries.

Meanwhile Gamache is being relentlessly attacked on social media as he returns to work, being called corrupt and worse.  Being Gamache, he is mostly able to rise above it.  Clara Morrow, his artist friend in Three Pines, is also being ruthlessly attacked on social media for a recent exhibition of miniature paintings.  Being Clara, she cannot rise above it so easily.  She is devastated.

The background of the novel is water.  The missing woman may have drowned.  Quebec is suffering through a serious flooding situation.  The water isn’t cleansing, but a powerful, unstoppable force that mows down everything in its path.  Water reveals, conceals, and takes away what’s precious as the officers work both to fend off flooding and find the missing woman.

As the layers of the woman’s story are peeled away, and to a lesser extent, the layers of Clara’s recent artistic endeavors, it’s clear to me that once again this is a writer concerned with the destructive and obstructional nature of surface appearances.  Look closer, she is always inviting the reader.  See what’s underneath.  Think about what you’re perceiving.

The other thread concerns Beauvoir, who is leaving the Surete and moving to Paris.  The relationship between Beauvoir and Gamache has been one of the cornerstones of the series, and this book feels like a reset in every way.  For Gamache, much baggage has been discarded, but as old ties are severed and Beauvoir prepares to leave, another central question of the novel becomes, what’s next for Gamache?

This is the kind of book that when you’re reading disappears in your hands.  The pages to come quickly diminish to far less than the pages already read.  In terms of this novel, the flood of reading takes you away.