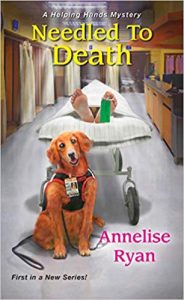 Hildy is a hospital social worker who leads a grief group. As the book opens, the group is meeting, and a new member to the group has lost her son to addiction, a sadly unremarkable story. What’s different is that the woman insists her son wasn’t involved with drugs and that he was murdered. The cops are skeptical and have closed the case – the young man was found with a needle hanging out of his arm, and after all, does a parent always know what their child is up to?

Believable enough for sure, but Hildy’s instincts tell her something is off, and when she consults with Mattie, an ER worker, Mattie seems to feel the same way. So Hildy reaches out to the boy’s mother and visits her at her home to see what she can find out. When she scores the boy’s computer and manages to get past the fingerprint requirement (I won’t tell you how she does it, but it’s very clever), she finally gets the attention of the police.

The cop in charge of the case, Bob Richmond, is actually interested in Mattie, and she gets him to reopen the case. He even invites her on a ride along where he lays down the law in terms of what her involvement is going to be, and it’s pretty believable. Unlike a more typical cozy where, yes, the main character is dating a cop, Hildy is authentically folded into the investigation because she’s a social worker. (She does make a dumb woman-wandering-alone-in-a-dark-place choice toward the end, but it all works out).

Her backstory is a doozy, and it plays into the telling of the story. Hildy was a foster kid who in adulthood has few ties from childhood (a few foster “sisters”) and as a result she has trust and control issues. She’s often compelled to clean to restore order to her universe – clutter actually makes her uncomfortable – and she also will find a candy or ketchup pack she’s somehow filched and put in her pocket. It’s another remnant of her foster childhood, and these very specific kind of details make Hildy a very memorable character.

All of this, along with her fledgling and believably awkward relationship with Bob, gives the story a real richness. The mystery part of the story is complicated and tricky enough to satisfy even the most particular lover of whodunnits. The resolution and general atmosphere is slightly more gritty than a cozy reader might expect, but the ultimate viewpoint is an optimistic one, which certainly fits into the cozy universe. This is definitely an author well worth your time.