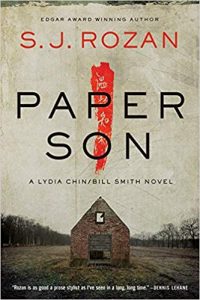 Eight long years and a change of publisher later, Lydia Chin and her partner Bill Smith have returned. They have been missed! Rozan’s series is one of the best private eye series around, with the fresh take of shifting narrators between books. One book will be Lydia’s, one Bill’s. This one is Lydia’s. She’s summoned to Mississippi to get a never met cousin out of jail for murdering his father.

First of all, what? Mississippi? What’s hard core New Yorker Lydia doing in the Mississippi Delta, and who knew she had cousins there, much less that Chinese grocery stores are/were a fact of life in small Mississippi towns. Lydia’s scary (and entertaining mother) is sure her cousin Jefferson cannot be guilty, because he’s family.

Lydia has no such shared assumption when she gets to town and discovers that her cousin has broken out of jail and can’t be found. All private eye novels mostly involve the private eye driving around and asking questions, and first, figuring out what questions need to be asked. As Lydia and Bill are very much out of their element the questions that need to be figured out are difficult ones.

Really good private eye writers make the questions, the questioners, and the search an interesting one. Rozan is a really good private eye writer. As Lydia untangles her family threads, explaining to Bill why the Mississippi branch is named “Tam” rather than “Chin” (you’ll need to read the book, as it explains the title), the story circles back to what is ultimately the strongest element in Rozan’s best books: family.

The more Lydia searches for Jefferson and the more she discovers about the Mississippi branch of her family, the more personal the search becomes. The tangled threads leading to a solution involve the small grocery owned by the family, online gambling, meth cooking, and a visit to the university town of Oxford. Along the way there’s a crash course on the nuances of racism in the south, only a slight variant (sadly) from racism in the north. The Chinese are not immune.

To Rozan’s credit she assumes she knows nothing about Mississippi and presents Lydia’s story as that of a stranger in a strange land. That said, she’s obviously done her research, and the setting has a ring of authenticity. The whole novel features the combined skill sets in Rozan’s extensive toolbox: a fast moving narrative, memorable characters, and a setting that’s almost equally as important as plot. This is a more than welcome return to print of one of the greatest private eye writers on the planet.