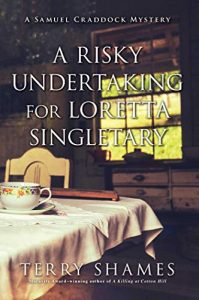 This is the first Samuel Craddock mystery I’ve read, largely on the advice of other readers I met at Left Coast Crime this year.  As when I had a bookstore, the best recommendations often come from fellow readers, and I decided to give this one a try.  I was intrigued when I sat next to Terry at a panel and she told me this was a police series, by far one of my favorite sub genres.  This is a softer police story than say, one by Michael Connelly, but it’s still a police novel and a very good one.

Set in tiny Jarrett Creek, Texas, Samuel is comfortable in his community and friendly with his neighbors, including Loretta Singletary, who often stops by bearing baked goods.  Samuel has noticed recently that she’s changed her hair, which he describes as (I’m paraphrasing), as kind of a color with no more of those little curls.  Up until this point in the book I wasn’t convinced the narrator was a man, but this comment convinced me.

When Loretta  mysteriously disappears, though she‘s taken her car and a suitcase, her neighbors (including Samuel) are worried because she’s asked no one to water the lawn or feed the cat and she’s left dishes in the sink, something that in her tidy house seems wildly out of place.  Samuel hasn’t gotten any baked goods lately, either, and though he’s been distracted by a new lady friend, once he starts thinking about it – and Loretta’s disappearance is starting to drag on – he starts to seriously investigate.

When Samuel gets a call from a neighboring town’s police chief, telling him a woman of about Loretta’s age has disappeared as well, things really heat up.  The connection between the two women seems to be online dating and Samuel’s deep dive into that world is ably assisted by younger colleagues, far more comfortable with the online universe.

While I would not call this novel a cozy, it has some cozy attributes.  Cozies often feature older characters and acknowledge that a community is made up of folks of all ages.  It’s also softer than a traditional police novel, another cozy attribute, but it’s still a police novel, with the procedure part taking center stage.  As readers, we get to be “in” on Samuel’s investigation, and while I figured out one of the bad guys I was surprised by the neat, yet inevitable, twist at the end.

This novel is told in the first person, so we know Samuel’s doubts as well as the way his mind works as he figures out what’s going on.  Along with the writing, which beautifully describes the Texas countryside, the interplay between characters, the beautifully rendered small town setting, and the carefully laid down plot  made this read a stand out.  Samuel is a gritty new Sheriff Andy Taylor for the 21st century.