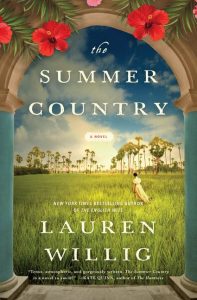 This book is an absolute dream.  Willig has crafted an epic set in 1800’s Barbados, in the world of sugar plantations and slaves.  Told in two narrative threads, one in the 1850’s and one in the 1810’s, it’s clear that the two story lines are intertwined – the mystery of the novel is how exactly they are connected other than by the same sugar estates.

In the 1850’s, we meet Emily and her cousin Adam, who has brought Emily and his new wife Laura to start a life on Barbados.  Emily has unexpectedly inherited an estate on the island and she’s eager to see it and try to puzzle out why her beloved grandfather has left it to her and not to her brother.  As fate intervenes, the Davenant family takes Emily and her cousins in, inviting them to stay indefinitely.

While Emily is grateful she’s also puzzled, and something seems off to her about the Davenant’s plantation, Beckles.  When she finally sees her own estate, Peverills, she’s shocked to find it a ruin, and she’s warned by everybody to be careful and stay away from it.  She’s a hard headed and stubborn woman, however, and she does neither.

In the story set in the past, we meet Charles, freshly returned from school in England to take up the reins of the family business, much to chagrin of his younger brother Robert, who had been left behind to care for their ailing and now deceased mother.  While the Davenant heiress is put in Charles’ path whenever possible, it’s the heiress’ maid, the self contained Jenny, who takes Charles’ heart.

In creating this story, Willig has gifted the reader with the feel of the islands, the beauty, the heat, and the endless green that to a Western eye, can seem almost sinister and confusing.  As Emily and Charles settle into their lives in different time periods, both are trying to feel at home in a strange place.

Another thing that makes Barbardos uncomfortable, especially for the abolitionist minded Emily, is the slave culture. Early on, Emily states her thoughts to one of her first acquaintances on the island, Dr. Nathanial Braithwaite, an Afro-Caribbean who has left Barbados for education and come back home to practice.  His parents are some of the richest business people on the islands.

In Charles’ time, slaves are an accepted part of life, and Charles is as uncomfortable as Emily, though he’s bound by laws he doesn’t agree with and very inconveniently, he’s also bound by his love for a slave woman.  He can do nothing to free her.

Both stories are compelling: Emily’s, as she’s shown the island by George Davenant, leaning to ride, learning the sugar business, and seeking out of the way parts of the island in the process.  (The scene where she attempts to mount a sidesaddle for the first time makes reading the whole book worthwhile.)  Meanwhile, Emily is drawn into the lives around her, absorbing and learning, not least from the lady of Beckles, the formidable dowager Mts. Davenant, George’s grandmother.

Charles’ story, as he tries, in his good hearted and optimistic way, to find ways to solve the slave problem single handedly and to have his love by his side if at all possible, is as frustrating as Emily’s. There are heartbreaking choices he has to make, made vivid by Willig’s hand with memorable characters,

There are heartbreaking occurrences – a slave uprising, a terrible fire, a cholera epidemic – that place the whole book on an epic scale, but it’s an epic bookended by two different, and very specific and personal, love stories.  Willig neatly draws her story threads together at the end of the novel but even after over 400 pages, I was left wanting more.  As I reluctantly closed the last page I knew my heart was lost somewhere in the pages of Willig’s prose, and on the island of Barbados.

Note: Thankfully, there’s an afterword that talks about the historical context of the story – highly recommended.  Also recommended for the reader interested in this terrible period of slave ownership are Barbara Hambly’s Benjamin January books, set not in Barbados, but in New Orleans. For the reader interested in the cholera epidemic, the plague of the 1800’s, I recommend Hambly’s Fever Season and Christine Trent’s A Murderous Malady.