In the face of yet another list naming many male, noir writers as “the best”, I asked readers for their favorite books.  You all answered with passion!  As Julia Keller pointed out, “Lists are really just conversation starters.”  You all started the conversation! You all really really love Dorothy L. Sayers and Louise Penny, but the answers ranged from Cornell Woolrich to Donald Westlake to Dorothy Gilman to two titles from the great Canadian suspense writer Chevy Stevens.  I listed the respondents alphabetically, and if you didn’t include a specific title, you’re not here.  But read on!  You may find some food for thought and new books to love.

Donald Adamek: Some Like it Hot Buttered, Jeffrey Cohen. 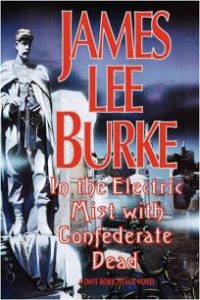 Margaret Agnew, reviewer: Sacrifice, S.J. Bolton.  This was a really scary read and I was alone in the house which amplified the story.

Robin Agnew, bookseller: these books meant to much to me during my bookselling career: Ordinary Grace, William Kent Krueger; Still Life, Louise Penny; A Cold Day in Paradise, Steve Hamilton; and In the Bleak Midwinter, Julia Spencer-Fleming.

Colleen Ayers-Petering: The Cuckoo’s Calling, Robert Galbraith, a great start to the series.  I hope she keeps it going, as I’ve devoured the first four!

Ronnie Bannerjie: The Case of the Constant Suicides, John Dickson Carr; if you prefer Carter Dickson, He Wouldn’t Kill Patience.  Beat Not the Bones, Charlotte Jay; and An Unsuitable Job for a Woman, P.D. James.

M.C. Hawkins: Surfeit of Lampreys, Ngaio Marsh (a.k.a. Death of a Peer).

Cheryl Haws: The Maltese Falcon, Dashiell Hammett.  He created touch, steel eyed detective Sam Spade who at times seems more like the bad guy.  He weaves a tale of crime while weaving in the attraction of three women.  Spade in the end stays true to what is right. 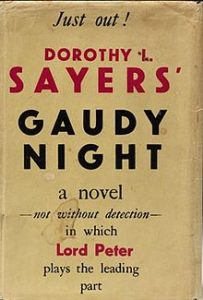 Clemmie Jackson: Dark Tide Rising, Anne Perry.  She takes today’s problems and puts them in the days of taboo and embarrassments.

Dottie MacKean: Case Histories, Kate Atkinson.  Good news is there are others in the series.

Dervla McTieran, author: In the Woods, Tana French.  Her first novel but beautifully written, fabulous characters ad the best twist; and Lethal White, Robert Galbraith, a writer at the top of her game writing series characters to just fall in love with and come back to again and again.  Heaven!

Catherine Meza: I Married a Dead Man, Cornell Woolrich, because its mainspring is the gulf between the haves and have nots and follows the Woolrich patented downward trajectory to doom.  And no cats or chocolate.

Maureen Murphy: Brat Farrar, Josephine Tey (a.k.a. Come and Kill Me) is my all time favorite.  It is so very English.  Who knew what evil lurked under the thin layer of British civility?  I also love Deborah Crombie’s Dreaming of the Bones, I consider it her breakout book.  Gemma and Duncan have a fine line to walk between being police officers and lovers, and they do it so well.

Eric J. Peterson: The Outfit, Richard Stark, a.k.a. Donald Westlake.  It is where Parker as the heist expert and problem solver is really defined and it is a prime example of the criminal as protagonist.

Diane Plumley: Rendevous in Black, Cornell Woolrich “the sky was rashy with stars”; Beast in View, Margaret Millar, fooled me; any Ruth Rendell; Beyond the Dark, Kieran Abbey a.k.a.Helen Reilly, superb chase through Manhattan during WWII; The So Blue Marble, Dorothy B. Hughes, sociopath twins; They Buried a Man, Mildred Davis, the death is not the point; Embarrassment of Corpses, Alan Beechey, witty, suburb plot, fantastic characters – plus a ferret!

Susanne Schafer-Coates: How the Light Gets In, Louise Penny.

Terry Lynn Thomas: Murder at the Vicarage, Agatha Christie.  Love the setting and the twist at the end.

Anneke Waalwijk: Louise Penny’s Still Life.  Great characters you get to know intimately, wonderful language and impressive setting.  After a few pages I was hooked and continued to read all her books. 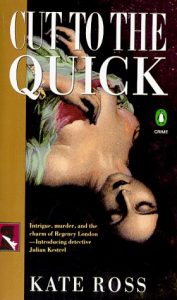 Lauren Willig, author: Cut to the Quick, Kate Ross: pitch perfect historical mystery with complex characters, beautiful prose, and a wonderfully twisty plot; and Dorothy L. Sayers’ Gaudy Night, my favorite favorite favorite of all time, which is as much a love song to Oxford and a meditation on the difficulties of responding to the conflictinf demands that are placed on women as a crime novel.  Also, of course, beautifully written with some gorgeous moments of satire.

Mary Young: The Daughter of Time, Josephine Tey.  Inspector Grant is in the hospital while recovering from injuries when a friend brings in a collection of portraits for him to think about to occupy his time.  He refuses to believe the sensitive face of King Richard III belonged to a man who murdered his nephews.  With the help of friends, Grant investigates the historical mystery and comes to a conclusion that, in real life, caused controversy and debate that lasted for decades in England.