The second in a new series from the talented Denise Swanson, and a wrap up to a favorite series by Heather Blake, by our reviewer Cathy Akers-Jordan. 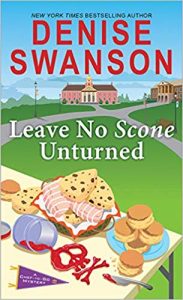 Former corporate executive Danielle (Dani) Sloan helps solves murders, when she’s not busy running her catering business, that is. Set in the college town of Normalton, IL, Dani is busy selling lunches to students and catering private dinners as a personal chef. She can’t help it that she keeps getting involved in murder cases or the fact the she’s attracted to the campus head of security, Spencer Drake.

It’s the first week of the semester and while Dani is busy catering student welcome activities to advertise her business, strange things are happening around the campus: car jackings, a strange creature in the river (or is it just an urban legend?), and the murder of a homeless man. Dani gets involved because one of her student boarders, Ivy, starts donating leftover catering food to the local homeless group. When their contact, Deuce, is murdered Dani and Spencer learn about his surprising background – but is he connected to the car jackings and the mysterious creature in the river? Complicating the investigation, and Dani and Spencer’s budding relationship, is Detective Gray Christensen. While he seems attracted to Dani he also respects Spencer, and the three of them make a great detective team. Since he’s a local cop, it’s likely he’ll turn up again.

Because Dani is a caterer the descriptions of the meals are truly mouthwatering. Seriously, I’ve had to stop reading to fix a snack. There’s extra fun for readers of Swanson’s other mysteries with characters crossing over from her Scumble River/Back to Scumble River series.

The light-hearted tone and steady pace make this a compelling read, perfect for a sunny afternoon. I just wish Swanson could write this series as fast as I read it!

A Witch to Remember, Heather Blake. 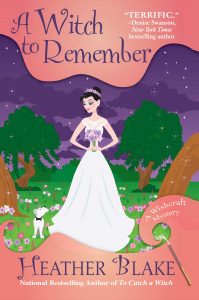 Darcy Merriweather is a witch and not just any witch. Her special ability is that she can grant wishes.

This utterly charming and unique series, set in the Enchanted Village (near Salem, Mass., of course), is populated with witches of varying abilities. Each witch is born with one special kind of magic talent (potion making, healing, etc.). Witches who die come back as familiars (animals who can speak to living witches). Visitors don’t realize the village isn’t just a Salem-Witch-Trials gimmick or that the village is full of magic. It is also currently full of visitors for the Firelight Psychic Festival.

The focus of this book, sadly the last of the series, is Darcy’s marriage to Police Chief Nick Sawyer. When the local tearoom is burned down the day of Darcy’s pre-wedding party, the body of murdered co-proprietor Leyna Noble is found within. Darcy and Nick are determined to solve the crime before their marriage but could the answer be as simple as the hatred of evil witch Dorothy Hansel Dewitt, known for her taste for arson? Could it be somehow related to the traveling Firelight Psychic Festival?

At the same time another important event is pending: the reaffirmation or replacement of the Elder, the witches’ leader. Will Darcy’s mother remain the head of the magical village or will the power pass into the evil Dorothy’s family? It all depends on Harper, Darcy’s pregnant sister, who has never quite accepted her magical heritage.

The plot moves swiftly along with a satisfying ending to the mystery (with a truly unexpected surprise twist) and a happy wedding. After nine books it’s hard to say good-bye to these characters but the series’ charm makes the books worth reading more than once.